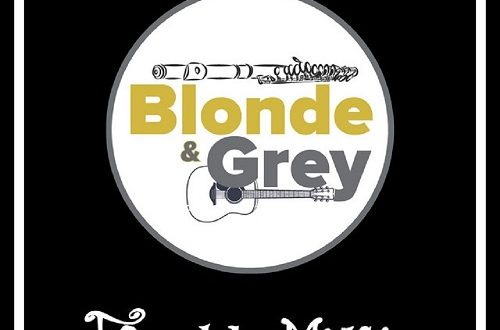 The creative union of a singer/songwriter with a flute playing retired high school music teacher doesn’t bode bright for an exceptionally well-rounded release. Blonde & Grey confounds such superficial impressions from the outset. Neil Friend and Kathy Olsen begin their debut on a confident note with its title song “Face the Music” and it will immediately win newcomers over. Its strengths are clear; the punchy pulse, seamless incorporation of flute with the arrangement, and pristine vocal harmonies will impress all but the most cynical listeners.

I’m a great fan of how they use percussion in their songs. Dominant musical strands color tracks such as “Downstream”, but the story doesn’t end there. Neil Friend’s songwriting isn’t content with crafting a by the numbers predictable neo-folk cut so the track has an assortment of low-key touches scattered throughout adding a dash of style. “Mud Mills Road” is one of the album’s best displays of the dual vocal talents they bring together and how Olsen’s flute playing essentially operates as a third singer. The song’s vocal melody is quite fun.

Olsen’s voice commands much of the lead vocal for “This Is Real”. Key passages, however, benefit from double-tracking her voice, and Friend does make important vocal contributions as well. It has a much more languid pace than its predecessors and, once again, the flute has a transformative effect on the song. “Settle With Yourself” is one of Face the Music’s unquestionable highlights. The slightly foreboding quality of the arrangement fits in well with its lyric, a tempered warning to its subject. There’s no bluster in the words, but it is nonetheless ominous.

The blending of the acoustic and electric guitar parts during “All Day” is well done and further bolsters its simple but beguiling melody. Friend’s voice takes the forefront here while Olsen plays a supporting role. The songwriting has an apparently inexhaustible penchant for crafting beautiful melodies and this continues with “From My Viewpoint”. The lead vocal duties fall into Friend’s lap once again and he conveys the earnest emotions of this love song without the right amount of sentiment.

“Trying Too Long” balances its melodic inclinations with physicality quite well. The steady push from the drumming fuels the song with a surge of needed urgency and Olsen’s vocals harmonies during the refrain are a boon to the song as well. There’s a near Jerry Garcia-esque rasp in Friend’s voice listeners will enjoy. Hard-charging folk-rock, for all intents and purposes, concludes Face the Music. “Minute by Minute” puts an emphatic exclamation point on the album without ever veering off into alien territory and both Olsen and Friend deliver rousing performances.

What might have, given its origins, sounded like a lightweight throwaway in other hands sparkles under Blonde & Grey’s watch. Kathy Olsen and Neil Friend share a performing spark that’s impossible to duplicate and it’s tantalizing to consider where they will go from here. They haven’t hemmed themselves in stylistically, far from it, so there’s nothing they can’t do. Blonde & Grey’s Face the Music is, with any luck, the start of something special.