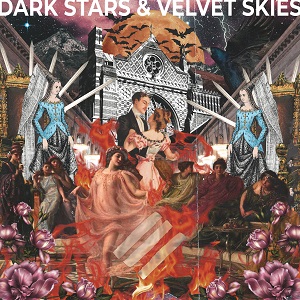 Burn the Ballroom have been enjoying a pretty exciting career over the past ten-plus years. Starting off with You’re Already Mine, these rockers never hid the fact that they come into the studio with their heart on their sleeve, but finding that perfect middle ground between open-chest poetry and sharp, hard-charging rock beats has been as much of a challenge as it has been for anyone in the game – until Dark Stars & Velvet Skies. In this new EP, Burn the Ballroom aren’t sounding like a band that is still trying to figure out where they stand among the east coast indie hierarchy, nor do they come across as players who are still contemplating what kind of music they can and should be producing together.

There’s confidence dripping from the fretboard in “A Ship That Shared Your Name” and lead single “Still;” there’s a quaking emotional kick to “Calm Down” and “Fall With Me.” We are never alone with our thoughts in this extended play, and the band wants it that way. They’re playing to the never-ending circus of self-doubt, angst, emotional discord, and outright youthful frustration that seems to last far longer than it should among members of our generation, and potentially making the one COVID-era alternative rock record that doesn’t feature an isolation theme.

The best part about songs like “Still” and “10 to 1” is that they don’t feel like they’ve come to us manufactured or cut from the same creative cloth as a lot of the previous material to enter the Burn the Ballroom discography, which isn’t to say that they lack continuity with their aesthetical predecessors.

There’s just more rebelliousness in their style than what you’d hear from something that’s merely been rehashed and reheated from past studio sessions, and it becomes impossible for even the more novice critics to deny in tracks like “Calm Down” and the record-starting “The Long Way Down.” Some of the verses in those two songs struck me as being particularly raw and deep-feeling, potentially more than any others this band has recorded have been, and yet they don’t drown out the pleas of the other material here at all. This is collectively a really well-put-together EP, and one that plays more like an album than it does a midyear sampler meant to pacify fans until another tour comes around.

There’s more venom in everything from the vocals to the guitars you’re going to discover in this six-song tracklist than you will some of the commercially bankrolled material emerging on the right side of the dial this season, but that’s not the main attraction in Dark Stars & Velvet Skies. You might come for the surface-level fireworks, but I think most listeners are going to stick with this EP for all twenty-six minutes of play because of the humble tone with which the band addresses their audience from beginning to end. They’ve got nothing to hide here and everything to bear, making their expressiveness too unfiltered for a serious music lover to ignore.

User Rating: Be the first one !
Share
Previous Gorazde “The Fury of Lullabies” (LP)
Next Todd Omohundro “The Future is Calling” (LP)