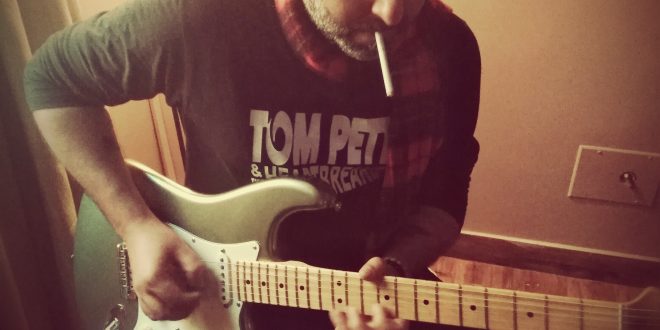 When I started ‘Izzie’s Caravan’, the great thing was there was a rationale behind the project and that was to explore the origins of the blues. So I had the freedom, as a solo artist, to revert back to the classic artists and their sounds and find that common denominator which is the ‘feeling’ and the ‘spirit’ that’s so prevalent in their music. Honestly, for me the blues has been a new lease on life so to speak, and as a personal journey it’s allowed me to develop an identity as a blues musician while preserving the great traditions it was built on. Equally so, I’m an absolute Fender fanatic, and for me it’s an American artifact…American history…and its affiliation with some of the greatest blues guitar players really inspired me, to the point my first EP was titled ‘Leo’s Guitar’. And you’ll hear that rawness in the next record ‘On The Pull’ which will be out in June. So I guess, in terms of both spirit and sound, I would classify my music as an exploration of the blues.

Wow, this is a tough one! I still remember my introduction to rock was as a young child listening to my dad cranking ‘Money for Nothing’ by Dire Straits which is an absolute sonic onslaught. At that point I knew the guitar would play some part in my life. Growing up though I was a hard-core Aerosmith fan… Tom Petty, John Fogerty…all major influences on me. Later on though, listening to guys like Clapton, Stevie Ray, Johnny Winter, John Lee Hooker, was honestly life changing for me. But the two guys who mean everything to me are Lightnin’ Hopkins and Buddy Guy…’Stone Crazy’ by Buddy Guy…enough said!

It’s real! Especially in the sense of the tradition of it. Everything I write, everytime that I’m inspired to play or record, it’s authentically coming from a real life experience or something I heard on the news, or what’s happening around us in the world. And you can hear that come out in songs like ‘Lightnins-a-Howlin’ (Leo’s Guitar EP) which is about myself taking refuge in blues records while the news is reporting about a world in chaos…or even ‘Tracii’s Ballad’ (Zephyrs EP) which believe it or not was written for my cat Tracii but then I ended up dedicating it to the tragic loss of animal life in the horrific Australian fires. So, when I write, it has to be an introspective experience and it has to mean something to me. At the end of the day I just hope there’s someone out there who can relate to what I was feeling at that moment when I wrote that song.

Any plans of live shows in the near future?

I’d love to hit the road soon for sure. Of course, these are strange times and everything’s at a standstill…but I do hope to have a whole bunch of music behind me to take on the road by next Summer.

Seeing the ‘Rolling Stones’ was great…seen Aerosmith a whole bunch of times and man they are so good live. But I guess the highlight has to be AC/DC with Slash’s Snakepit opening for them two nights in a row in Toronto. The coolest thing was meeting Slash, Keri Kelli, and that entire Snakepit band and then meeting Angus later on after the show. I’ll never forget that. I was really crazy! I’d go to the venues really early, hang out there all day, drink beer…so I remember when Angus came out to get into his bus, the Security guard knew me coz I was there all day and he was kind enough to let me get ahead of the mob. Really cool experience for me as a fan.

On the ‘Leo’s Guitar EP’, it has to be ‘Lightnins-a-Howlin’…that’s my tribute to the blues greats and what blues means to me. In a way, it’s just my way to really express my appreciation of the history of it all….the culture…and digging deeper, i’d like to think that there’s a positive message that despite any adversity, I can find solace in the blues and the listener can choose to do the same or find their own path to personal peace. On the ‘Zephyrs EP’, I’d have to say the title track ‘Zephyrs’ is very meaningful to me. This EP is a real shift in gears, and it was heavily inspired by Tom Petty’s ‘Echoes’ in terms of how profound personal experiences can be when writing songs.

I’m a lot more confident with my identity now and that really has allowed me to plot out a pathway forward. I think it is a bit of a struggle to plant your virtual feet, so to speak, as a musician with how rapid technological evolution is now. Identities have become hybridised, sounds have become fragmented and it can be overwhelming when you’re trying to carry a more traditional sound forward. So there were a lot of nerves with that. But i’m a lot more comfortable in my skin now and I hope blues and rock fans dig what they hear.

Oh this is cool! Beer with Buddy Guy for sure…that’s my dream! Play a gig with Clapton at his Crossroads festival. Co-write a song with Tom Petty and Mike Campbell. And dinner with Lightnin Hopkins and John Lee Hooker just for the stories they would have to tell.

I’m currently finishing up the recording for my 3rd Ep titled ‘On The Pull’ which should be available in mid-June. I’m really excited about this record because it’s a full-throttle blues-rock record…it’s loud, fast, really gritty and raw… and just something you’d want to crank up in the car! I’ve been digging deep in the Johnny Winter catalogue so blues-rock fans are hopefully really going to dig this!