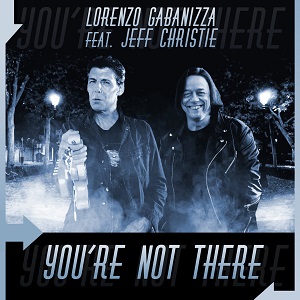 The newest single by Singer/Songwriter, Lorenzo Gabanizza, is a blues soaked ballad, with an existential overtone. “You’re Not There” is one of those titles that tells you just enough to peak your interest, yet holds the potential to go several directions. In this case, Gabanizza is by turns, self-reflective and observant. You get the sense that he is an introspective artist, and this type of material, perfectly complements that. “You’re Not There” is the latest addition to a dense catalog of work by Lorenzo Gabanizza.

In 2018, Lorenzo was involved in what was described as a “terrible traffic accident.” He recovered by 2019, and was back in the studio. The tone and texture of “You’re Not There,” would possibly indicate someone who has found gratitude and wisdom, after experiencing trauma. Not much is known about Lorenzo’s early life. “You’re Not There,” certainly sounds like a songwriter who has been well tenured and appreciates the nuanced aspects of their craft.

Interestingly, “You’re Not There,” features Jeff Christie on Lead Vocals. At no point, does this not feel and sound like Lorenzo’s song, though. His innermost thoughts and emotions, radiate from the bluesy soliloquy, that surprisingly never seems to wear out its welcome. Having said that, this is the type of piece that is most suitable for a certain setting and mood. Lorenzo insists that you do a deeper dive with him, as he channels the likes of Cohen and Waits, at different points, albeit from a safe distance.

Production quality is high on “You’re Not There.” There are what sounds like several supplementary instruments, most notable and effectively, a soft piano. Lorenzo knows how to find the right emotional doorways, and appeal to the sentimental corners of the heart. Lorenzo borders on being maudlin at certain points, but maintains a sincere lucidity, throughout. There’s a fatherly quality to the vocals that are both soothing and knowing.

Lorenzo Gabanizza boasts an abundance of accolades, in the form of chart topping songs, and festival appearances. His songwriting on “You’re Not There” is so replete, and possessing of gravitas, that most can’t achieve it, without years of plying. It’s unclear why Lorenzo chose Christie to do Lead Vocals, here, but it proves to be a quality choice. The song feels rather personal, therefore Lorenzo choosing not to sing lead, is an interesting decision. Regardless, the track seems to mostly exceed its intentions.

Lorenzo Gabanizza has shown no signs of slowing down, after his unfortunate accident, a few years ago. He’s the kind of artist who inhales an experience and exhales a song. “You’re Not There,” provides the type of stillness and comfort that it aspires to. It’s the kind of song that reminds us to stop and truly appreciate the moment we are in, before it passes without retrieval. Lorenzo Gabanizza is quietly building an impressive body of work, that will go on to provide a serviceable legacy. At this point in his life and career, Lorenzo sounds truly thankful to be here.