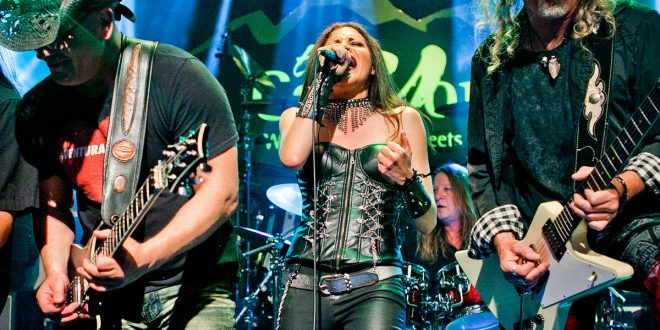 Fearless vocals and a raunchy good time – the song “Flies Like Whiskey” is an infectiously-fun track from The Guitar & Whiskey Club band. While some might find the sound something out of the past, leave it to a band from Ventura, California to keep the melodic guitars and heavy riffs up-to-date.  “Flies Like Whiskey” is self-released and brings that old-soul vibe to a modern tempo.

When Wylde sings “…dead flies at the watering hole, that’s when I knew! Knew it was true, flies like whiskey too” she has this unstoppable grit in her voice, laced with charm and beauty. She’s more Janet Gardner of Vixen than Joan Jett or Lita Ford, but Wylde definitely keeps this train hauling ass down the tracks. I think the story telling part of the song is fun. This band seems to have a good sense of humor and even better sense of human nature. Wylde even talk -sings a few times to get the crowd (listener) engaged in the audacious tale. When she sings “’cuz it’s loaded with flies” she laughs in a wicked cackle of a laugh. This might be completely out of left field, but something about the way she sings and tells the story reminded me of Train and Patrick Monahan, too. Maybe it’s the storytelling. It feels like a ‘night out’ song and a great song to gather a group of friends and watching it performed. I’m not sure that it’s an anthem, but it’s definitely fulfilling to the rocker appetite.

The percussion arrangement in “Flies Like Whiskey” is equally exciting to the onslaught of guitar sounds. It’s a pounding effort, but a tug-of-war with the rhythm and lead guitars. At first the guitars are strung acoustically, but when Wylde starts to rev up her voice, the guitars fall in line with a power-punch. Just like Irish whiskey, the smooth factor is there, only with a smokier tone and flavor. While the overall tone and vibe to this song is more classic rock, fans of country rock could also embrace. This track has a lot going for it musically – the arrangement, mix and vocals give it a strong, complete product. While closing my eyes listening to it, I definitely played air guitar (and air drums!).

Overall, “Flies Like Whiskey” is a great sounding track and a nice introduction to the Guitar & Whiskey Club. I’m dying to hear them live and something tells me that same energy they have on the recorded track is just as meatier on a live stage. They come across as very genuine, and virtuosos. Fans of Joan Jett, Vixen, Lita Ford, Heart, Sammy Hagar, Pat Benatar and Journey will want to take a listen and add “Flies Like Whiskey” to their playlists.

User Rating: Be the first one !
Share
Previous Baseball Gregg releases Calendar LP
Next Schaus’ appears to be Grinding