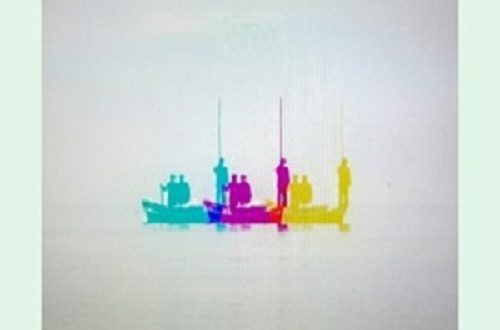 Simmering beneath the surface in a fuzzy hue, we discover the outlandish melodic tones that will serve as the centerpiece for “Tumbleweed Tornado,” one of the ten tracks to be heard on Bloom’s Taxonomy’s Foley Age this late winter season. Though the structure of the song quickly lends itself over to synthesized ambiance as opposed to following a singularly noise-influenced trajectory, Foley Age isn’t without plenty of sonic indulgence foreign to the mainstream listener. “Cosmic Village of the Jaguars” crosses over into dream-pop territory, whereas “Locked In” stays in touch with another facet of post-punk surrealism courtesy of its texture-heavy harmonies. There are no limits for Bloom’s Taxonomy in tracks like the title cut, “Pluvius” or the supple “Imaginary Angles;” there is only a sense of melodic containment important to framing the music (rather than simply giving us rough cuts of pleasant noise songs). You will indeed find the existentialism of Bitter Lake here – but, situated beside it we find a fleeting element of classical simplicity I wasn’t expecting to hear in this album at all. It’s brilliant, and reason enough to give this LP a second listen.

Bloom’s Taxonomy could have been a lot more abrasive with the rhythm in “Mount Bromo” had he wanted to, but there’s definitely plenty I can say about the self-control he shows off here instead. Although it might have been aesthetically predictable (and thus fluid) to go with something a bit heavier on the backend for this performance – as well as the initially bass-centric “Earthrise” – this could be the precise reason why a different route was selected in the long run.

There’s not as progressive a feel to this tracklist as what the short but memorable Bitter Lake consisted of, but this too feels completely intentional on the part of the artist. The poetic nature of the synthesizers is the greatest point of interest in Foley Age, not the manner in which the story they tell is built before us. This is all about the celebration of substance as opposed to the worship of virtuosity, which not only hints at a depth I hadn’t noticed in this player before, but actually adds to his overall presence in the moment.

If you were already liking the vibes Bloom’s Taxonomy had hammered out in the last year, you’re going to be absolutely in love with what Foley Age is packing this month. While it’s featuring a very different look than the one its predecessor was built atop, the versatility of its leading man is one hundred percent intact for all ten of the songs included on the disc.

Whether it be the lush harmony of an ominous “Obrigada Nada” or the melancholic moan of “Elephant Park” as the track greets us ahead of any other in Foley Age, this LP is a revelation for Bloom’s Taxonomy and, with any luck, just a small preview of what the solo project is going to be recording throughout the next decade it spends in the underground spotlight.

User Rating: Be the first one !
Share
Previous Hazel McQuade – It Ain’t Me (SINGLE)
Next SOUNDS OF GHOSTS