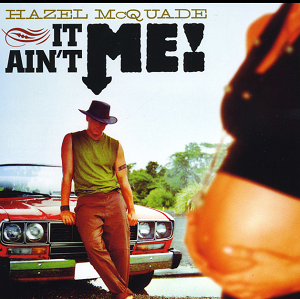 Hazel McQuade – It Ain’t Me (SINGLE)

Your mama is your mama, but your daddy ain’t me, croons rising country star Hazel McQuade with experienced fervor. His voice wavers with an appropriate intensity but never reaches a crescendo that insults the other musical elements of the track. Like many artists stepping into the limelight during the post 2010 era, McQuade’s distributive image dominates internet headlines and Spotify pages, making the sharp contrast of his traditional country image – complete with black hat and prairie landscape – all the more potent and crisp aesthetically. McQuade sings in a way that emphasizes his youth and a related bad boy sense of fun, but strangely enough he doesn’t come off as naive or immature. Perhaps it’s the confidence in his cadence, accompanied by the way he seamlessly spits out smart and snarky hooks from line to line.

Contrary to popular belief outside the genre, the country music scene has been a constantly shape-shifting animal. Each artist who steps into the venue often takes core elements of the musical genre and puts their own, individualistic spin on it – a prominent example of modern pioneering being Dwight Yoakam’s invention of country’s hillbilly sub-genre. The latter entailed a shedding of traditionalist, more wholesome and Christian-friendly images with a grittier, more rock-and-roll influenced look making Yoakam reach a wider audience outside the country music fanbase. McQuade seems to have a similar approach. There’s an edginess to his own work with the single It Ain’t Me, a slight mean-spiritedness particularly in lyrics such as You didn’t sleep in my bed that day/So don’t hit me up with no DNA…

In a genre that often finds detractors accusing it of being exclusive, or somewhat antiquated, the lyrics to It Ain’t Me say it all. The more graphic nature of what the song depicts lyrically, along with McQuade’s enthusiastic, gung-ho approach to his vocal performance gives the entire track a sort of bitter taste in your mouth. But ironically that’s part of the appeal. The song feels authentic and representational, regardless of its distinct Southern twang and rollicking bar piano and fine-tuned, drawling electric guitars. There’s also a somewhat satirical, almost wisecracking undercurrent to McQuade’s delivery. He overemphasizes certain words, which along with the darkly humorous lyrics themselves elevates the song to a cynically entertaining level. It feels like the ideal track after a bad breakup since the music deals with real and concerning issues in an amusing, devil may care kind of light.

Such an approach also compliments the current cultural climate concerning events on the newspaper’s front page. There’s a certain resignation that normalcy is not around the corner, and it’s been interesting to see how that societal trait has been represented in various forms of art and entertainment. Artists affected range from those like McQuade to the more obvious, outlandish figures such as Bjork. In short, the song feels fast, fresh, and up-to-date with the times. It’ll be interesting to see what McQuade does next, and whether this effective amalgam of elements is merely a musical fluke or a consistent style of performance.

The music of Hazel McQuade has been heard all over the world in partnership with the radio plugging services offered by Musik and Film Radio Promotions Division.  Learn more https://musikandfilm.com