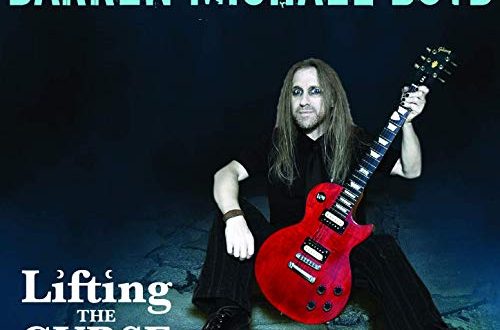 Creeping out of the silence with a hesitant sonic slither, “Circle of Sixes” is waiting for anyone brave enough to enter its groove-packed gateway into Darren Michael Boyd’s virgin instrumental LP Lifting the Curse, and in the next four minutes that follow, the track will set the stage for everything soon to pass in the next eight songs. Along with its neighbor, the enigmatic metal symphony “Notational Witchery,” “Circle of Sixes” drops the chills on us right out of the gate in Lifting the Curse, and makes it abundantly clear to all within earshot that if they can’t stand the heat coming out of their headphones, they’ll need to take a step back now – for it only gets more intense from here on out.

“The Earth is B flat” continues the stomp of the introduction with a pulse-raising beat and forceful fretting that collides together in a captivating hurricane of harmonies, and though this track isn’t as bludgeoning as the bass-heavy “Music in the Murder House” is, let’s be honest, very few songs ever could be. “Music in the Murder House” is a hefty helping of old fashioned heavy metal prowess, but it doesn’t weigh down the midsection of Lifting the Curse with a lot of overblown solos that wouldn’t serve the flow of the record well at all. Just like the ensuing 80’s rocker “Tails & Entrails,” this song is nothing if it isn’t to the point and arranged for speed and comfort of both regular metal fans and passersby who just want something to head-bang to this late winter.

Darren Michael Boyd changes it up with some Quentin Tarantino-style string action in “This song won’t get played on the radio” and the Vice City-like “Was it something I said?,” but by the time we swing back into the clutches of “Little Toad,” the metallic grind is once again in full force and dragging us asunder into a devil’s playground of bastardized beats rooted both in rock’s constant rebelliousness and metal’s unabashed machismo. If the goal here was to finish even stronger than he started, Boyd scored a slam dunk with the construction of this tracklist, which seems to get even more entrancing with every listening session I spend with it.

Lifting the Curse concludes with a psychedelically stimulating song in its title track that simultaneously brings us full circle to where we once started from while courageously looking ahead into what could be a sophomore effort from Darren Michael Boyd, and though I’ve listened to it a few different times, it’s another tune that feels even more suffocating every time I hear its mighty melodies intertwine with one another. I’ve never been much for instrumental albums in the past, but Boyd’s new record is too difficult to dismiss as anything other than a really wonderful set of songs that feels perfect for the eclectic aesthetic rock and metal are both embracing at the moment. We’ll soon know for sure, but my gut tells me this won’t be the only hit this acclaimed guitarist releases in his solo career.