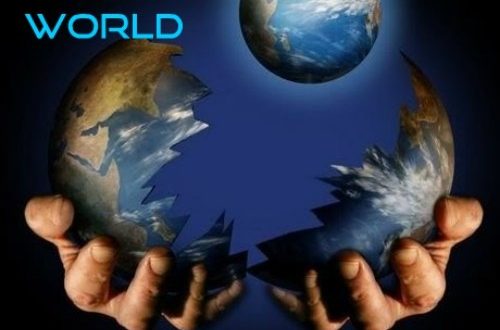 With an electrified glow, Fitzsimon and Brogan come swinging into a blues rock dirge reimagined as a dream pop ballad in “Very Last Day in Clown Town,” a bittersweet, cathartic micro blast from their hot new record Big Blue World, out everywhere this summer 2018. Lead singer Bee Brogan weaves her darkly seductive vocals between Neil Fitzsimon’s thoughtful guitar virtuosity, and we’re throttled by swaying riff after riff before giving into a guttural solo from Fitzsimon that leaves us in a dizzying daze not unlike a psychedelic drug. “Scared of the Dark” picks up the tempo and the potency of this dazed feeling, and for a minute the band devolves into Screaming Trees style garage pop that skips through the countryside with a carefree, pastoral attitude that is utterly charming. In the chorus, Brogan promises that she’ll never deceive us, and her words couldn’t have been delivered with any more honesty and genuine affection. “The Only Girl” comes close though, spinning us in a delightfully surfy kind of a beat into a more introspective realm of lyrics.

Big Blue World contains so many varying textures that it can be difficult to keep up with the band’s constant relentlessness. In “Sniper’s Target” we finally get to an oasis of calm in between the incendiary power tracks, and it ends up being one of the biggest hits of the entire record. Brogan has such an ethereal draw in her vocal range that makes her quite adept at performing at a number of speeds, and it could be in her ballads that we are able to gaze upon the full scope of her artistic depth. The jazzy “The Wounds Are Healing,” rightfully placed a third of the way through this LP, is another excellent demonstration of her tremendous capacity for emotional dexterity. Production wise there’s very little to complain about with Big Blue World, as it lives up to the standards that have quickly become obligatory in today’s fast paced music industry that’s never ceasing to grow and evolve technologically and aesthetically. There’s an eclecticism that makes the album feel a little scattered when enjoyed in its entirety, but I also feel like that’s part of the attractiveness of Fitzsimon and Brogan’s brand. They’re not making an album that steadily repeat the same essential sound from song to song, but looking to give us a full plate of different delicious tones and harmonious sonic freak outs to consume and ponder.

The title track from Big Blue World was probably my favorite, and it’s likely because I view it as an all-encompassing signature song for the band and their unique style of pop that defies the limitations of genres and scenes with a pomp and bravado that got me into the music industry to begin with. Fitzsimon and Brogan have another full length album scheduled for release later this year, and if it has any of the same valiant expeditions into the sonic ethers that Big Blue World does, it’s going to be a very good year for this awesome British rock duo.

User Rating: Be the first one !
Share
Previous Clayton Morgan – Taste For Love (single)
Next Sara O’Brien and The Community Rocks Kids