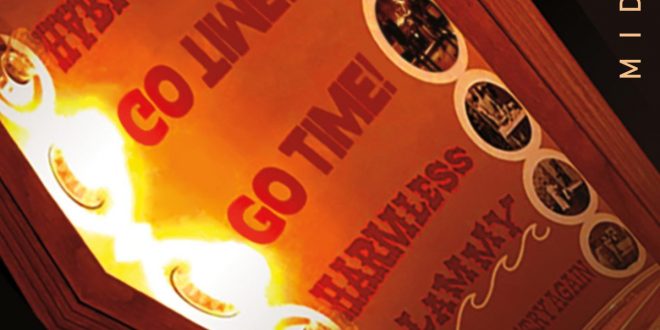 Drums explode out of the silence and come to life before our very ears in “Hard to Pull the Trigger,” the first of nineteen tracks in Go Time!’s incredible album Midway, out this winter everywhere indie music is sold. The white noise of the amplifiers is manipulated and forged into a blustery melody that carries us right into the exotic bass of “Hole in My Mind,” where we soon find ourselves in the clutches of the band with no sign of escape anywhere in sight. The pendulous “Undertow” and sparkling “Spare Parts” couldn’t have been cut from much different a cloth, but flow together progressively, setting us up for the electric ballad “Next Time” and the wistful lyricism it has to offer.

We’re barely a quarter of the way in into this LP, but Go Time! haven’t wasted a speck of the sonic space that these first five songs have afforded them, overwhelming us with their stampeding percussion and rollicking riff rock. “Role Reversal” slows down the pace for a second before letting the stop-start grind of “All Dressed Up” impart an unforgettable melody laced with stoic but emotive lyrics that are possibly the most relatable of the album. A techy, synthesized intro leads us into the blood and guts of the hard rocker “Awkward Truth,” but its tonality pales in comparison to what we find in “Second Best,” a sonically sophisticated ode to new wave that couldn’t be much more hostile and tension-yielding if it tried. Larger than life textures are all around us, but they’re so supple that they don’t overshadow the music and its complexities in the least.

“Ghost Inside of Me” haunts the middle of Midway with its Screaming Trees-esque psychedelia, and though “Every Little Everything” has the resonance of a folk-rocker, its identity is derived more from gloomy post-punk than it is resilient pastoral music. This doesn’t dampen the upbeat spirit of “Disparity” or “Parting Gift;” if anything, it actually makes their bright colors all the more shiny when we fall upon them in the natural order of the track listing. There’s a similar bipolarity to “Reprise” and “Best Intentions,” but it’s a lot less abrasive than what we come across earlier on in the record. “Sweet Ever After” plays with noisy nuances but eventually gives itself over to a polished pop harmony that primes us for the conclusion of Midway better than anything else could have.

Steam heat rises off of the rhythm section in “Satisfaction,” but our focus is never removed from the song’s striking vocal track, which is among the most textured and radiant in the whole of the album. “Scraps” catapults one last heaping handful of rasping punk rock rage in our direction before letting the ascending beats of “No Claims or Pretentions” finish us off with its sweltering grooves. It would take a dedicated music fan a long time to sort through the treasure chest of material that Go Time! share with us in Midway, but in the short time that I’ve spent with the record, I have found myself completely enamored by its amiable, albeit ambitious, framework. This is rock for a complicated and demanding generation of listeners, and it’s a sound that I can’t see myself getting sick of anytime soon.