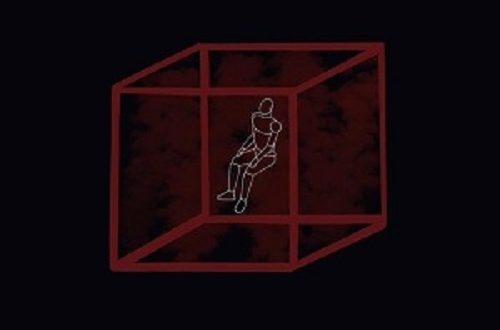 Dagan Thogerson’s nearly two-decade run as drummer for indie rock vets Murder By Death isn’t enough for the talented musician. He’s found another outlet for his restless creativity with the instrumental project Go to Space Die and the eight-track debut Red Air Don’t Care. He’s written vigorous progressive rock composition for this collection rather than disappearing up his own backside with excessive would-be epics, but his chops are beyond question. Thogerson plays every instrument, including drums, and encompasses worlds of color and sound within eight minutes.

The opener “Threes Away” provides us with a blueprint for everything that follows. Go to Space Die proves it isn’t hidebound to that template, but it nonetheless sets important guideposts for the project’s music. He thoroughly steeps the first track in a heavy and cinematic-flavored sound. Physical and full-bodied production further accentuates these qualities. “Air and Land” continues pursuing much of the same trajectory.

There are echoes of Yes and Rush, among others, in the way Go to Space Die develops the performances. Varying tempos mesh well with the handful of riffs Thogerson concocts for each track with guitar and keyboards leading the way. Make no mistake, however, Thogerson’s mainstay drums provide the critical foundation of “Air and Land” without ever overwhelming listeners.

“Spring Ahead” has a much lighter touch. Red Air Don’t Care isn’t bereft of melody, but it isn’t among the song’s glaring strengths. This track is an exception. Its melodic attributes aren’t especially complex but, nonetheless, effective. It’s the highlight of an overall powerful instrumental. Many listeners will feel like Go to Space Die’s music falls much more comfortably in the category of progressive metal; “Way Up” underlines this. Some of the melodic virtues present in the earlier “Spring Ahead” are here as well, but it’s once again the restrained guitar pyrotechnics that captures your attention.

“Rollaway” is the album’s shortest track and has a “commercial” directness lacking in other cuts. The slightly synthesized guitar sound Thogerson achieves over these eight songs is the real story behind this release. It balances on a stylistic tightrope between hard rock and metal without ever going too far in either direction; its accessibility, however, never compromises its substance. “Sheets” continues a shift in tone beginning with the previous track. There’s a more physical tone presiding over these tracks that hits harder.

He continues leavening it, however, with a now distinctive lighter touch. The cohesiveness of these eight songs is impressive. Thogerson’s obvious intention to create an unified musical work shines through every step of the way during Red Air Doesn’t Care. The finale “Jumpinthelake” runs almost seven and a half minutes long and brings down a thunderous curtain on the release. This is big-screen music, dynamics galore, and the theatrical bent of the writing provokes an emotional and physical response from listeners. Go to Space Die’s Red Air Don’t Care is an intelligent and complete musical statement that deserves a wide audience. Dagan Thogerson’s vision of progressive rock provides some of the most inspiring song-scapes in recent memory.