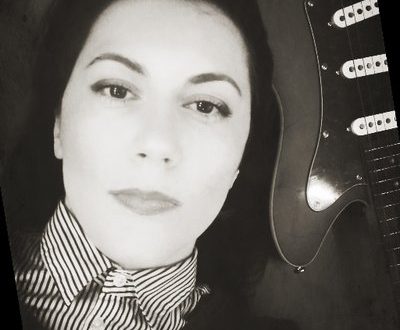 Eclectic melodies and surreal soundscapes comprise The Girl from Cherry Valley, the stunning debut album from Jas Frank & the Intoits, which is now available everywhere that independent music is sold and streamed. Frontwoman Jas Frank leads the way with her sultry vocal in the centerpiece single “All the Highs All the Lows,” the electro-folk ballad “When the Rain Stops,” the boisterous blues bruiser “In a Hole” and the comely title track, but meets her match in the Intoits’ Marko Gacina, who handles electric, acoustic and bass guitar in the album, and Slaven Bolanca, who contributes backing vocals, mandolin, acoustic, classical and bass guitar. The Girl from Cherry Valley is a sprawling, highly stylized virgin offering from this Croatian phenomenon, and it’s definitely captured my attention this spring.

The existentialism presented to us in the music video for “All the Highs All the Lows” is dripping with irony and cutting emotionality, and actually represents what listeners can expect out of the album it was cut from beautifully. The ache of isolation is translated to us through evocative imagery shrouded in the sort of dim, ominous lighting that tends to guide one’s path through the deserted city streets in the dead of night. Much like “Human Animal” and “In the Early Mornings,” “All the Highs All the Lows” pushes the boundaries of what constitutes a conventional pop song, but rather than indulging in all of the dry excesses of its experimentalism, these songs maintain seamless hooks that keep them from drifting too far away from the mainstream model.

“So Far Away,” “Unlight the Light” and “High in Space” in particular are startlingly expressive in their tightly arranged textures, and in the case of “Virtual Friends,” it could be said that Gacina and Bolanca’s master mix is as much of an agent of evocation as Frank’s lyrics are on their own. There’s so many dimensions to these tracks, so many ways to interpret the larger narratives that they paint for us both in enigmatic prose and moving instrumentals, that to describe The Girl from Cherry Valley as anything other than a fully-engaging, cerebral listening experience simply wouldn’t be doing its defiantly inventive content justice. Jas Frank & the Intoits are fresh on the scene, but they’re producing material in this album that is anything but amateurish.

If you’ve been searching for that uniquely sublime record to satisfy your lust for premium avant-garde content this spring, you needn’t look any further than what Jas Frank & the Intoits have constructed in The Girl from Cherry Valley. Pop, rock, blues, jazz, eastern folk music, noise and even ambient experimentalism all play a part in the mammoth melodies that this power trio dishes out in all ten songs found on their first album, and for those of us who live for bands who don’t play by anyone’s rules but their own, it doesn’t get much better than what this LP is made of. For a debut album, The Girl from Cherry Valley is smooth, urbane and boasting a lot more polish than most anything else out right now, and I can’t wait to hear whatever follows it in the future.

User Rating: Be the first one !
Share
Previous Across the Board drop new LP
Next “Million Miles Away” the latest single/video from the Gary Douglas Band