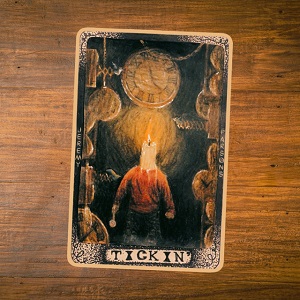 4 weeks ago MUSIC REVIEWS, PICK OF THE WEEK

In a determined clap of the drums, Jeremy Parsons launches into his new song “Tickin’,” and brings with him all of the intensity that a young singer/songwriter can muster in the recording studio and then some. The drums pitter-patter like a broken heart that has just found its other half, but the guitars are giving them a run for their money with an anxious, freewheeling strut that reaches into our chest and encourages us to live life like every moment is our last.

Parsons lets the patient percussive sway formulate a firm, neo-industrial rhythm that he will soon use as a canvas to paint a beautiful picture in stark black and white, and I found that resisting the urge to get on your feet and engage with these beats by the halfway point of “Tickin’” becomes increasingly difficult with every listen.

It’s hard for me to decide what the true fever pitch of this track is; the buildup to the harmony-led hook or the chorus itself, but that could be because both have so much to offer in their own right. Parsons ensures that we’re always on the edge of our seats waiting for whatever sonic blow that the instrumentation will unleash around every turn in this song, but he deliberately leaves some space between the verses so that the instrumentation gets its fair share of the attention here.

One reason why I’ve been resistant towards contemporary country has been the overabundance of unfocused vocal arrangements, which is ironically the strongest element that “Tickin’” contains – with a heady alternative rock stylization to boot.

Jeremy Parsons must have spent a great deal of time and energy making every facet of this track as grand as it is, because if he didn’t, then technology might be putting a lot of quality producers out of work in the next few years.

Everything here – the guitars, the bassline, the percussion, and, of course, the lead vocal – is crystal clear and surreally acerbic, to such a degree that there are numerous occasions on which it sounds like Parsons is playing directly to us and no one else in the world. It’s intimate, vulnerable, and wildly emotive, and I think it will ultimately be what makes this song a stand-out favorite once those fabled end-of-the-year accolades come around.

“Tickin’” concludes following a volley of fretted fireworks and one final vocal harmony that lingers in the atmosphere around us well after the song has ceased to play. Jeremy Parsons was a name that wasn’t familiar to me before exploring his works a little more thoroughly, but in the time that has passed since I first got ahold of my copy of his latest single, I’ve grown utterly addicted to its springy grooves and undying emotion, both of which have been scarcities this fall.

He’s got a long way to go before he can hang his hat beside the legends of Nashville, but his most recent release sets the tone for what I’m sure will be a really rewarding and thought-provoking career – as long as he keeps his nose to the grindstone.