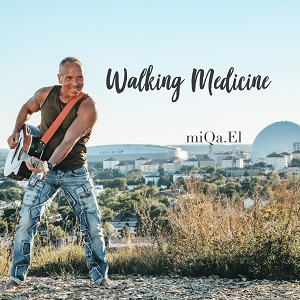 miQa.el isn’t just singing to us in the opening lines of the track, but instead pleading with us in the ascent towards the climax of his new single “Walking Medicine.” His words don’t have the desperation that might have with a different singer conveying them to the audience; he’s a man on a mission in this performance, and that mission is sending him from within the confines of his own heart unto that of another. Romance is in the air here, but not in the saccharine fashion it normally would be in contemporary pop.

miQa.el is reaching out to us through every inch of space in this mix; the tempo, the tone, and even the textural presence of the bassline have something emotive to share in this track, which isn’t something that I’ve noticed about any of the other crisp pop singles I’ve been listening to lately. High-definition producing is pretty standard in this genre, but going the extra mile is still evident, especially when the man in the center of the spotlight has the kind of singing capabilities that this guy undeniably does.

The percussion has a light and easy swing to it in “Walking Medicine” that initially seemed a little conservative for my taste, but upon closer inspection, I don’t think that miQa.el needed anything more to start up a nice, inviting groove that anyone can get into here. There’s not a doubt in my mind that he could contend with something a bit more large-and-in-charge than what we’re hearing in this piece, but he isn’t about showboating in this performance – he’s limiting himself in how far he can go, which speaks more to his self-awareness than it does any kind of lack of confidence.

I’m not usually into the folky side of pop music, but miQa.el has just too great a talent for me to ignore what he’s putting out right now. He’s graceful with his words and even more ethereal with his delivery of harmonies, and if he can get his foot in the door with mainstream audiences in the near future I think he’s going to discover a much more lucrative career than anyone in his scene would have predicted for him at its start. miQa.el is a real original, and he’s putting everything he knows to work excellently in “Walking Medicine” without having to lean on some of the more predictable elements we associate with the softer side of pop’s pastoral strain.