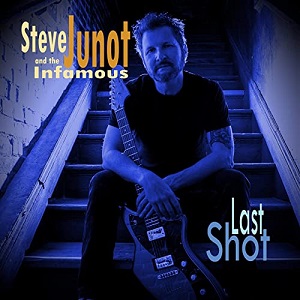 If there’s one blues musician who is into finding new ways to get his audience stoned off of pure sonic might, it’s Steve Junot, and his latest release with the Infamous in Last Shot could be his scene’s most prolific material this year. In tracks like Last Shot’s “Chasing My Blues Away,” textures are just as valid as tonality in the creation of a swanky harmony, and though they’re familiar entities to most of us, they’re delivered in such a uniquely indie fashion that it’s like we’re hearing them for the very first time. Longtime fans of this genre have a lot to be excited about with this LP, and more specifically, where it’s taking this artist’s sound.

“I’m a Losing You (Redux)” and “In the Morning” have an unmistakable pop appeal that is heavily reinforced by their polished production sound, but they’re not lacking in muscular blues substance at all – if anything, quite the opposite. Junot shows just as much of an interest in making these tracks palatable to the casual listener as he does the diehard blues brother, and despite the difficulties in doing so, he balances out the elements of pop, soul, and rock without ever skipping a beat in Last Shot.

There’s a lot of physicality to everything here, and when I say everything I mean everything. The thick riffing of “She Only Loves Me When She’s Drunk,” the heart attack rhythm of “Ain’t Got to Be So Crazy,” the pulsating percussive groove in “Juice Ain’t Worth the Squeeze” and the slinky strings in “Love is Like a Hurricane” are heavyweight forces to be reckoned with, and although they feature a slightly-scooped EQ that favors the low and high-end tones over anything in the middle, nothing in Last Shot sounds artificial or overproduced for even a second. Junot wants us to feel everything he’s feeling in a song like the tempo-based “Neutral Ground,” and through this mix, he accomplishes his goal flawlessly.

I would have made the bass just a little more understated than it is in “God Can’t Help Me,” but I think that I can understand what the intended concept behind this piece was. Even if it is one of the more monolithic tracks on Last Shot, “God Can’t Help Me” has a rather spindly chorus that, without the bottom-end textures, probably would have fallen flat the second time around. No one can accuse Steve Junot of not doing things his own way, and in this track, he owns his individuality better than he ever has before.

Blues and traditional rock enthusiasts are going to want to hear Last Shot as soon as possible if they haven’t already, because from where I sit it stands as one of the only unmatched performances in the genre to be captured on record this year. There are no commercial overtones to the music, no political agenda conveyed through the lyrics nor any eccentricities that are so blankly unfocused they make no sense to anyone but Junot himself. There’s just a lot of good blues-rock for a time in American history that could use any and all of its countless inspired grooves.