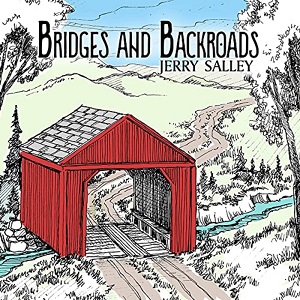 Prolific songwriting speaks for itself, and in the case of a player like Jerry Salley, it comes to define an entire career. Salley has been writing and singing in one of the most competitive scenes on earth, Nashville, for almost forty years now, and his talents are put to work marvelously in the sixth studio album to bear his name, last year’s Bridges and Backroads. Across songs like “A Memory Like Mine,” “Life to My Days,” “Be Better to Your Neighbor,” “I Tae the Back Roads” and “You Can’t Hear a Heart Break,” this singer/songwriter shows us that he has the ability to compose as well as execute regardless of the challenges presented from one song to the next – and in a record like this one, there are no easy roads to catharsis.

Salley is made to work for his supper in the songs like “Let Me Be the Bridge” and “I Miss My Miss in Mississippi,” both of which are singles for this LP, and I like that he seems to have gone out of his way in rejecting the insular feel so many of his rivals have been going for in their own pandemic-era recordings. He doesn’t care about taking the compositional long way home if it means getting a little extra gusto off the string section – all in the name of clarifying the emotions his lyrics frame so poignantly, of course – and personally I have to say that this makes Bridges and Backroads a winner all on its own.

This artist’s command of the verses has become a bit of a trademark with regards to his brand, and the attribute unquestionably leads the way in a couple of different moments here. “Dyin’ to Hold Her Again” is probably my favorite vocal track on the LP, but when Salley is coupled up with Rhonda Vincent in “Waltz Through the Ages,” we get to see another dimension of his singing style that wouldn’t have been as accessible to us were he not paired with such a talented counterpart. He brings a lot to the table all on his own, but when his skills are made to contrast, or even complement, those of another player in the same booth, that’s when we really start to understand how competent a musician this legend is.

Jerry Salley’s accomplishments are vast, from mainstream press accolades to Grammy and Nashville Songwriters’ Hall of Fame nominations just in the past two years, and I think Bridges and Backroads is yet another he should be proud of. I’ve come to associate his work with the most credible names in all of the bluegrass community, but when he’s on his own and hammering out a solo venture like this LP, we’re made to understand how much he’s really working with as a blue-collar player. I don’t think Salley’s reputation is going to get anything but more prominent in the wake of this album’s revival, and if you love real bluegrass, I believe you’ll agree with me.