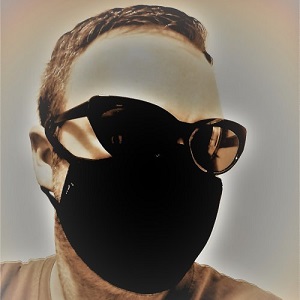 Canadian Musician/Visual Artist, Rick Christian, may have just offered us the official pandemic, musical memoir. His album, The New Normal, is a reference to exactly what you think it is, and Christian is sure to reinforce that, throughout. At 7 songs, the record is most likely considered an EP by most recording standards. That’s all Christian really needs to make an impression, and although not sonic perfection, The New Normal is a fine effort. While we can expect many musical offerings on the topic of 2020 and the circumstances that defined it, Christian has given us one, that stands out amongst the inevitable library.

In his brief bio, Rick Christian is described as a “new artist,” so we really don’t know much about his background , musical or otherwise. In an era where any sort of mystique is as rare as a Blockbuster, you could say the lack of Christian’s biography is an attribute as opposed to a detriment. Regardless, The New Normal is a striking debut. Each song is said to have an accompanying visual attachment, which is to be expected as we previously established. In his primary promo photo, Christian is appropriately wearing the ubiquitous mask we have all come to add to our daily sartorial makeup.

“The Human Race,” kicks things off with a soft programmed beat, that is somewhat hypnotic, as we eagerly await the vocal. Christian employs a take it or leave it, vocal effect, that gives the track an overtone of future shock, only in real time. There’s a well-placed synth piece, that holds everything together, and compliments Christian’s vocal melody, fluidly. Everything is layered tremendously well on this track, even if it does have something of a low frequency. Though not of major studio sound quality, “The Human Race” is an effective and competent way to kick off the record.

On “Machine,” we get more of the same vocal manipulations as on “The Human Race.” The synth here has an added sense of urgency and anticipation, and perhaps even a bit foreboding. It evokes a sense of dread and uninterrupted anxiety, that was the status quo for much of the lockdown, and surrounding periods. “Machine,” might not be the standout track on the album, but it is a vital one. It has a cold and metallic texture to the piece that effectively captures the temperature of the subject matter.

While that is just scratching the surface, Rick Christian’s, The New Normal is essential listening for anyone who lived through the suppressive extremes of the Covid era. Often times, records that are this specific in their take on timely topics, don’t always age, as gracefully as one might hope. This specific blurb in history is an exception though, as not one human life on the planet, of any age, was unaffected by it. The New Normal, and more specifically, Rick Christian, does a more than respectable service to the complex evolution of emotions that were an unavoidable apparition of a global crisis.  In doing so, Mr. Christian has not only earned his stripes as a compassionate and empathetic citizen, but an artist as well.