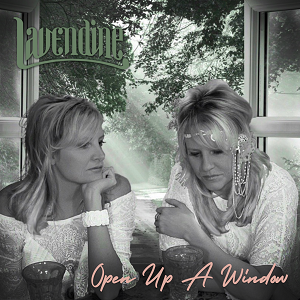 Lavendine – “Open Up a Window” (SINGLE)

Lavendine, the Oklahoma-based twin sister duo act comprising Jacy and Jana Ayers has made a striking return to the indie music scene with their first release since their 2013 debut album Feel My Way. On their latest single “Open Up a Window”, you already feel like this is the first chapter of an astonishing story that’s just waiting to be told. In the years since Feel My Way, the pair have certainly had their ups and downs dealing with on and off health complications and of course, the dog eats dog world that is the music industry.

None of this seems to have deterred as the duo who’ve written the song alongside Daniel Ayers (Jacy’s husband) and are joined by Greg Suran on guitar, bassist Sean Hurley and Blair Sinta on drums with the Ayers naturally on vocal duties that are just truly a sound to behold. While known as an alt-indie act, the duo has had a lot of success in the specifically Christian song demographic which has also shown the group their fair share of issues as far as keeping them potentially netting an even wider audience, the surprising overall mainstream success of their single “Rapture” has helped pave the way for more exposure for the group and this single is sure to continue the hot streak the pair have felt since “Rapture” exploded in the Billboard and Indie charts back in 2020.

This song is a heartfelt tone poem about reminding yourself of where you are to help guide you into where you want to be. It’s easily understandable and honest well the pair are drawing from due to the unfortunate past battles they’ve had to overcome. Even without knowing that the song is just brilliant constructed with a great emphasis on the vocal strengths of the sisters without overshadowing the fantastic accompaniments of the band. This is probably helped by the mixing and mastering of Ed Seay and the exceptional production of Warren Huart. Everyone is not just on the same page, their building on one another strengths in a way that transforms the song into something of true greatness.

The peaks and valleys of the song are fantastic with subtleties given to the instrumentals with its fantastic plucking guitar and bass work, and special props to the pacing of the song that starts low, intimate, and melodic before truly unfolding. Something that must be an intentional play on the lyrical composition of opening yourself up to the world. If you’re a fan of intimate ballads this is certainly the track for you with its a fantastic chorus that might be the standout part of the entire track. This might not be for everyone if only because its more uplifting narrative might be written off by some as “cheesy”, but I’d beg to differ.

Lavendine has always thrived on their authenticity and never repurposing themselves to fit trends all while keeping their finger on the modern musical pulse. I highly recommend this track for anyone looking for a song to lift them up or who wants something to feel free with as we open up our windows to this new world we’re in.