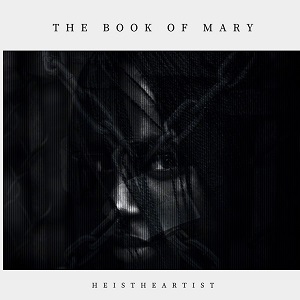 Heistheartist – “The Book of Mary” (EP)

When it comes to religious music finding success in the mainstream, there aren’t many artists that have found massive luck in crossover potential. The few that fluctuate between secular music and gospel/etc. tend to stick within the genres of country and adult contemporary, first and foremost. Some artists, such as Kanye West and Chance the Rapper, have had massive success in bridging the gap between mainstream hip-hop/rap and music with a definite focus on Christianity with both winning Grammys for their work on the subject.

The approach from secular artists striving to achieve a sense of clarity and accomplishment in non-secular music must come from a place of heart and soul, as audiences looking for enjoyment in the religious arts will be well aware of people who might attempt to come into the genre as wolves in sheep’s clothing. Rest assured, Heistheartist is no wolf, and his debut EP The Book of Mary will certainly convince audiences of such.

Beginning his path through music as an artist focused on soul singing, LeeMann Bassey quickly found himself searching for more, which he promptly found within the sermons of TD Jakes. Bassey quickly reinvented himself with a new name and new approach to his art — Heistheartist (He Is The Artist) was born. His single “Boom (Remastered)” has topped the Christian/Gospel charts in South Africa, and HITA has even dabbled in formulating mash-ups featuring talents such as Britney Spears, as well as covers. Heistheartist’s first release of 2021 was “Snake Charmer,” an instrumental that reached #8 on the UK EDM iTunes chart. All of this was merely setting the stage for what was about to emerge in the form of Heistheartist’s first non-single full release.

The Book of Mary is a substantive debut for Heistheartist, its tracklist constructed of four original tracks (all previously released, however) and two remixes of the EP’s closer. The music is well-produced and feels polished to a fine degree, with the religious undertones never fully eclipsing the fact that this is a project coming from a vocalist who originally studied soul vocal tactics. Heistheartist’s vocals shine, and the songs all feel like one complete idea flowing from a single source of inspiration. The rise in quality from the singles that preceded The Book of Mary is noticeable and worth shouting out as Heistheartist has only further reinvented himself as a musician wholly focused on crafting not only music that can be used in worship but music that will sound outstanding while doing so.

A minor gripe comes in the form of the repetition attached to “Childish” having three separate iterations all back-to-back within the one EP; it might have been better to save the remixes for a fleshed-out single release later on down the line after gauging audience response to the EP as a whole, but as the songs have all already seen releases and “Childish” would be the track I consider the standout for the project, Heistheartist is mostly just ahead of schedule in the planning. I’m confident that the game has just begun, and that Heistheartist’s only just barely started to come into focus.