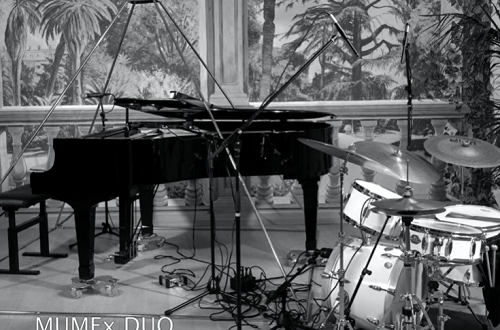 Louis Siciliano and Mauro Salvatore’s MUMEx Duo has carved out a rather impressive global niche for themselves in modern jazz unlike any other. One often encounters this sort of language in reviews, however, and you can immediately pin it down as customary journalistic puffery that has little, if anything, to do with its actual merit. Siciliano, however, lives and breathes each of his projects but the MUMEx Duo’s latest, Heat the Silent, is a little different.

Siciliano states in the accompanying press for the release that “Oblivion is the most widespread pathology of this new millennium. Everything is forgotten… [and] the fever of consumerism ravages everything like a runaway hurricane.” The MUMEx duo pushes back against that pathology and provides listeners with a musical antibiotic with this seven track collection. Siciliano and Salvatore are attempting to interpret the entirety of modern jazz with Heat the Silent, but don’t misread that ambition. It doesn’t translate into bombastic and/or pretentious instruments leading nowhere.

“Variations on ‘Estate’” opens the release. Siciliano and Salvatore begin the album in far flung jazz regions far more experimental and impressionistic than later tracks. Starting off on this foot presents challenges, but serves notice. It challenges listeners by fast separating the hardcore jazz fans from casual music listeners who crave meatier, busier arrangements than what’s heard during this performance. Salvatore’s percussion contributions are limited but atmospheric. There is a stark and downcast quality present in this song that will be uninviting for some. It is never, however, a purely intellectual exercise.

Heat the Silent’s second track “When All the People Are Sleeping” finds the duo venturing into more recognizable terrain. This is the first inklings of high-end modern jazz, the flower beginning to bloom, and Siciliano’s piano answers the call to invoke this style with imagination and individuality. Salvatore’s presence is larger here, but Siciliano’s piano playing carries the day. The first half of the freewheeling “Thelonious” is the first outright blown-away moment for me on the release.

I love the construction. Listeners hear the first mid-tempo descent, a tumbling sensation created by the marriage of Salvatore’s drumming and Siciliano’s piano. Timing is essential and the former’s percussion work is unerring. The latter’s piano takes over for a melodic break before Salvatore rejoins him, the tumbling faster than before, the momentum inexorable. It’s a modern jazz master class. The “scat” singing/vocalizing the duo works into “Joe’s Island” is Heat the Silent’s sole recognition of the human voice and adds another rhythmic dimension to the material. The composition veers in an interesting way between its minor key beginnings and much brighter, livelier passages as the performance moves forward.

“Beyond the Eight Door” is a creative eruption that will rate for many as the album’s defining moment.  Siciliano and Salvatore unleash the full breadth of the project’s creativity during this song, especially Salvatore. His drumming during the earlier “Thelonious” set the bar high for his performances but “Beyond the Eight Door” smashes it and audibly drives Siciliano’s piano to even greater heights. The MUMEx Duo’s Heat the Silent has non-traditional yet recognizable storytelling attributes and you can chart the slow build of the running order towards its inevitable finale. The journey is well-worth taking.