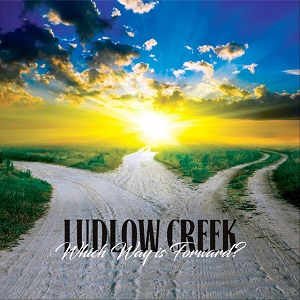 If you’re one to commiserate on the changing of the seasons, Ludlow Creek’s latest album Which Way Is Forward? is here just in time to keep the good energy of summer chugging along into the fall. Packed with twelve tracks and over an hour of musical content, Ludlow Creek is never one to skimp and their latest effort is no exception — keeping in line with what they’ve established with Hands of Time, Which Way Is Forward? doubles down on the highs and lows that the energetic Ludlow Creek is known for.

“Finding Our Way Back” starts the album off, welcoming listeners back into the realm of Ludlow Creek; it’s an upbeat and expectedly catchy way to kick the album off, and the band shows that they’re still operating at the top of their game, if not even a little more refined here than they had been before. “What About Love” is a moving ballad about the importance of putting aside differences in the name of peace and love, and not letting disagreements cloud your humanity.

It’s refreshing to see music born out of the country rock genre tackling such sentiments, and the band never veers into cringe-worthy territory as they bare it all for the listeners, opening their hearts in a humble way that most bands would shy away from. “Road to Nowhere” brings the tempo back up, offering a funk-driven entry for the record complete with gorgeous bass solos and crowd-work through foot-stomping drum breaks. “Chiano Morning” is another softer entry for Which Way Is Forward? and stands as a fantastic instrumental interlude. The addition of flutes is a great texture to toss on top of an already melodically-engaging track, and the placement of the track so early on is bold but beneficial to the dense tracklist.

“Stoney Lonesome Road” is one of the album’s standout tracks, as it melancholically reminisces on the golden teenage years of lead singer Allen Seals and how this one particular road has tied his present days to his nostalgic memories. The composition of the track is lush with a full instrumental and charged harmonies; at almost six minutes in length, it’s the most epic track on the album without too much contest (you’ll see) and it feels like it has the most breakout potential. “Sweet Celebration” comes next, and wisely pivots to something more upbeat and stripped-down as a follow-up.

“Pandemanian Rhapsody (Livin’ to Do)” gives “Stony Lonesome Road” a run for its money as the song clocks in at just under eight minutes, and feels like a phenomenal soft-rock entry up to the halfway point, where it shifts into something more in line with classic rock bands such as The Eagles — there’s no face-melting solo but the gentle guitar solo and saxophone solo more than earn their keep.

“With You” is a rocking follow-up that brings in the organ and a much more in-your-face rock lineup; the love song is another standout as it showcases the band cutting loose and having fun. “Steal Away” gives Michelle Scarpelli a moment to shine on lead vocals in its first verse, and it is a welcome, fantastic change of pace for the band and album. “Last Call” shifts back into classic rock mode, starting by giving listeners a melody Joan Jett and the Heartbreakers would be proud of, but it shifts into something new altogether by its finale. “Never Knew the Man” gives the album one last mythic track to go out on, with the seven-and-a-half runtime showing up like an old friend ready to party.

The band uses the track as a chance to send listeners off, going all in with solos and drum fills, before the track “Sunrise in the Trees” closes the album out altogether in a dialed-down, lo-fi way of just showcasing classic acoustic guitar. The closer brings things together, harkening back to “Chiano Morning” and the melodic, instrumental core of “Which Way Is Forward?” There’s a great density to the latest from Ludlow Creek, but there’s no inaccessibility, and for those with the time, the journey is an unforgettable one. The energy is immaculate, the songwriting has only improved since their last, and Ludlow Creek is showing that they might be named after a small, gentle body of water, but they have the power of a raging river.