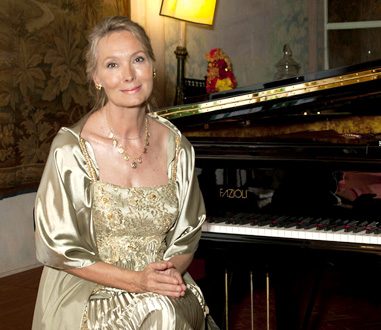 Telling a story with lyrics isn’t all that hard to do in the grander scheme of things, but to take material that isn’t just instrumental but in fact composed by someone else – not to mention one of the greatest to ever pick up a pen – and illustrate something to an audience takes a level talent that you don’t find every day in this industry. Grammy-nominated pianist Elizabeth Sombart is one of these special talents, and although she’s been a present force in the classical mainstream for quite some time now, it’s her award-worthy new album Singing the Nocturnes that started getting her some of the international respect she’s always deserved.

There was already a lot of attention on Sombart in Europe before her recording Singing the Nocturnes, with her interpretations of everyone from Beethoven to Johann Sebastian Bach and Motzart getting the attention of the press, critics, discerning classical fans, and even some outsiders across the continent, but it was her bold approach to Chopin’s often obtuse compositional style that made her abilities undebatable even in more discriminating western circles. Her precision is one of the main reasons, but it’s how she uses it as an instrument in itself in this bold collection of material that really sticks with listeners the longest.

A brooding undertow can be found in every corner of these arrangements, but it’s often when Sombart is picking up the tension in the backdrop that we’re able to appreciate just how much of her heart she’s pouring into each note of music she plays. She’s never quite aggressive with her delivery, but the execution is one that would seem possible only when offered by someone who has been educated in the fine art of timing more than the average player in classical music (or any other genre, for that matter).

As blunt as she can be, Sombart’s experimental mentality leads her away from being too rigid with her performance in Singing the Nocturnes, which shows us how little the foundations of her artistry have changed since she first wowed audiences back in 1998 with her debut LP.  Although I think there’s a lot of progress to be enjoyed here, there’s also nothing to suggest that she’s near a plateau, which is a lot more than I can say for some of the other artists being considered for similar accolades in 2022 and beyond.

Much like Chopin before her, Sombart is at her best when there’s nothing to hold her back creatively, and it’s unsurprising to anyone who keeps up with classical music and her career overall that she’s in line to pick up some additional awards for this latest achievement. Tonal presence and textural expression are two attributes that a lot of musicians spend their entire lives trying to cultivate, but in Singing the Nocturnes we find an artist who has mastered both all too fluidly to be ignored, even among those who would hold classical artists of any background to a standard much higher than the status quo can accommodate.