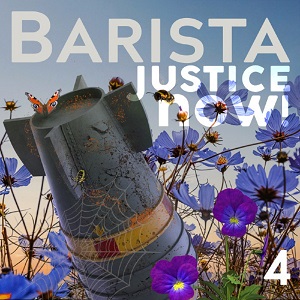 Cutting us with big melodies in “Anything” or exploiting a minimalist concept in a larger-than-life way with “Bitch,” Barista seeks out a higher level of tonal communication in the new album Justice Now that is hardly common in rock music contemporarily. There’s a lot to explore in this record, and all of it begins with Barista’s charming use of classical themes and hard rock melodicism, both of which have been sorely missing from the majority of pop music making its way onto the charts. 2022 has been an experimental year, but this is a release that exists independently from most of the trends I’ve been following.

“The Night Train” gets things started on the right note, but it isn’t until we get into songs like “Billions” or “Lonely By Choice” that the true brilliance of the compositions here starts to click for listeners. At first, Barista’s approach to hooks is rather black and white, but as we progress in the tracklist it becomes too obvious that straightforwardness is but a starting point for poetic depth in Justice Now. The lyrics tell us a lot, but the fluidity of the material is truly what puts this release over the top for me.

“Breath” and “Cage” shape a personality for this record on their own, but I think they make more sense to listeners after experiencing the LP as a whole a couple of times through. Barista wants us to break these down from a personal perspective, but the commentary in some of these tracks is decidedly more insular upon repeat listening sessions. It’s not a problem for the audience, of course, being that the duality this kind of concept produces more or less establishes the narrative as multi-interpretive, which is anything but standard in the pop music universe at the moment.

Justice Now pushes the limits on a sonic level in several moments, but the most enduring among them has got to be the climax of “Little Bird” and “I Exist, Right?” specifically. When Barista lets go, there’s a catharsis to behold here that is brooding and beautiful in countless ways, and if that alone were to be expanded upon in a future release, I think this act would finally be looking at the kind of mainstream-quality applause that every artist in the underground works so hard to achieve. The premise is there in this album, and now it’s just a matter of filling in the ends with a bit more instrumental virtuosity.

I was excited to finally review Justice Now after catching up with the buzz this record has been racking up long before it landed on store shelves, and overall I’d say Barista swings for the fences and hits it out of the park in almost every second of the tracklist. Rock is best when it’s left to run wild, but there’s also something to be appreciated about a release as controlled and rounded together as Justice Now is. Top to bottom, this is an album that insists upon itself when and where it really counts.