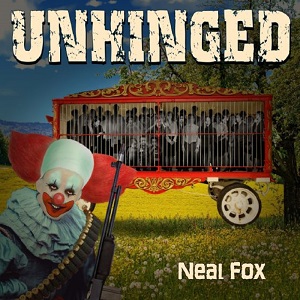 With a strutting groove to set the tempo, Neal Fox explores a chillwave-style beat with extra melodic moxie in the title track of his new album Unhinged this October, making it clear in this song’s first sixty-seconds what kind of a carnival thrill ride we’re in for in this LP. The lyrical content is a bit eccentric, but it’s heartfelt and unstoppably metaphorical if you’re breaking it down through a social lens, particularly considering what follows in the ominous “Insanity Was Throwing a Party.” Fox has a bone to pick with the world here, and although it comes off harmony-laced and well-arranged in terms of pop songwriting, his performance is accompanied by a sense of chaos that only makes the narrative he’s constructing feel more urgent – and immersive.

“Fishy” has a pummeling blues beat, but as much as I love its cosmetics I think that its superior is “Truth Matters,” a cerebrally balladic song immediately following it in the tracklist. “Truth Matters” and “The Good In Us” have a soft decadence coupled with discord that makes their play sound more surreal than it would have been otherwise, and while we get into more straightforward songcraft with “Dear Facebook,” the experimental edging in this record never completely fades from view. Fox is going out of his way to try things he hasn’t in previous affairs here, but the irony is that he’s winding up sounding more like himself than he did in his last two LPs, at least from how I would judge this record.

“My Special Girl” takes a minute to find its beat, but when it does, it has the most clandestine charisma of any song on this album. Its charms are unstoppable, and they’re made of little more than instrumental kinship with the lead vocal, found here arguably in its most fragile state of any included in Unhinged. It’s a good prepper for the simple folky “After the Great Reset,” but a deliberately choppy forerunner to the goliath of a song in “You Have the Right,” which is easily the most beautiful and moving piece in the record’s second act. Any allusions to compositional greatness before hearing this song seem to feel dwarfed by comparison in hindsight, being that in this particular track, Fox sounds like he’s singing purely from his soul and nothing else.

We conclude Unhinged with the ultra-surreal “That Rabbit Hole,” but even with the postmodernity of this final bow, Neal Fox’s presence in the mix never devolves into one of a ringmaster leading a mad circus as one might expect just by looking at the cover of this LP. Unhinged comes full-circle someway, somehow, and through its non-rigidity, I think we learn a little bit more about who Neal Fox is as a man, a musician, and an aging alternative songwriter continuing to evolve and grow with the medium he’s been a part of for the last quarter of a century. The bottom line? This is an album that no alternative aficionado is going to want off of their shelf this fall.