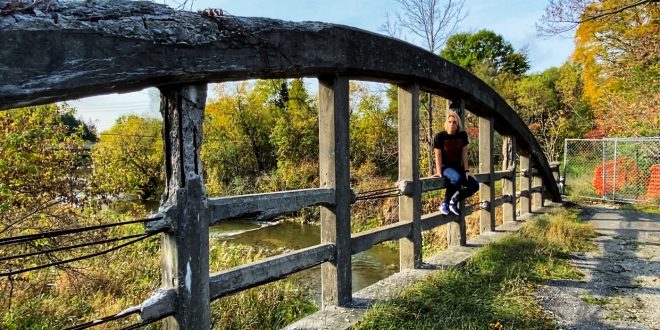 How are you feeling about this year’s music you’ve put out so far?

Great. I think I’ve put out some of my best work so far this year with the release of “Driveway” off Jestem Krzywym Lasem and there’s some other stuff still due to come out in the coming months.

The year is coming to an end! What are you doing in these last few months musically?

A lot of the focus over the last couple months has been on putting the final touches on JKL which is being released everywhere digitally first on October 29th, but I already have some other work on the go, like a new Crooked Forest release called “Wasted Time” that I just had a great drummer (Shane Slimmon) hop on and just finished mixing. And in the middle of all of that, I’ve been working hard at releasing more Jaimee Eat World tracks, which is my Jimmy Eat World cover song band project, and I’m really excited for everyone to hear how those are going to sound.

What are you working on right now in the studio?

Literally right now just fine-tuning “Wasted Time” and beginning the next wave of Jaimee Eat World tracks. I’m also working on some other special full-band covers to pay homage to some of my other favourite artists; I’m underway with a cover of “Walking Disaster” by Sum 41 right now which will be out by the end of the month. And then next Jaimee Eat World release… well, that’s a surprise.

What are your studio sessions looking like these days?

A scattered disarray. I have a lot of sessions right now that are in a varied state of completion and trying to find the time to polish them all off has been a little tricky, because I’m still really focused on promoting Jestem Krzywym Lasem as we lead up to the release.

Is it just you when you go to record or do you work with others?

Up until grabbing Shane on board to track live drums for “Wasted Time” everything I do is completely in-house and done by me exclusively. So far this has been working really well for me, but I’ve been getting that itch to get back to a full-band studio recording set-up like I used to do.

Who is the person that you want to work with next whether it’s putting them on a track or just producing?

I’ve been trying to entice Benjamin Gibbard with photos of kittens and puppies, but no luck there yet.

How are you customizing your sound in your next tracks?

I’m not wholly sure how to answer that since I’d argue everything I do is customized, but it all just depends on really what I’m feeling in that moment. There’s been a lot of times I’ve approached a song with an idea how it’ll sound, but for whatever reason in that moment the feeling changes and something entirely different ends up on the record instead.

How do you make sure that you’re customizing your overall vision for your music?

I just pop open the Pro tools sesh and get rockin’. The vision is shaped with the production, I don’t really set any limitations or goals necessarily for any given project.

What is your overall vision for yourself?

To just be myself, tell the stories I think are important to tell in the moment in a way that’s interesting and hopefully inspires some sort of thought when someone else listens to it. Everything I do is in the name of communicating ideas and making connections.

How are you leading with love with your music?

Where can you be followed on social media?

Everywhere! But the best place is just to cruise around crookedforest.ca to find everything.