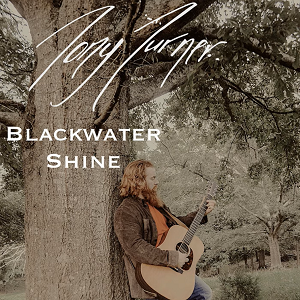 Alabama based husband and father of three Tony Turner brings a strong sense of family and tradition into his songwriting. He weaves a vivid picture of a world in miniature, touching on character and rendering a feeling for place on every level. He has a robust soulful voice with a tone reminiscent of a young Steve Earle and his debut single “Blackwater Shine” highlights his vocals in ideal fashion.

His introduction to award-winning Nashville producer, songwriter, and publisher Mike Hilliard and his company Hilliard Entertainment laid the groundwork to make this possible. Hilliard recognized Turner’s promise early and, with co-writers Jesse Brogdon and Eddie Wilson, penned the new single. It frames his voice in a polished and dramatic arrangement. The composition, likewise, finds an ear-catching balance between the modern and traditional you can hear in its synthesis of light electronic instrumentation and time-tested guitar.

The lyrics are outstanding for many reasons. The wealth of significant detail instead of generalities is one. There’s a lot here for listeners to sink their teeth into rather than the standard assortment of clichés. Turner, however, helps the words stand out more by singing them as if he wrote every syllable. You would never know unless you were “told” that he isn’t the writer. Turner, like all great singers, sounds like he draws from his own experiences and claims the lyrics as his own.

It has light atmospherics, appropriate for a song looking back, but any nostalgia ends there. The musicianship has urgency throughout and listeners will feel like they are swept along by its steady energy. Turner and his collaborators structure the track in such a way that it never overstays its welcome and pays off for listeners at the right places. Pacing is a key in its success and strengthens its enduring value.

It is easy to get the feeling that Turner is in this for the long haul. There’s nothing about “Blackwater Shine” that suggests he’s a shooting star of any sort, primed to burn out soon; instead, listeners can expect he will build on the extraordinary promise of this debut. A lifetime’s worth of experiences infuses Tony Turner’s voice with audible pathos and he sings with the confidence of someone born to do this.

The production provides a superb forum for the performance. Understanding the material that you are working with is critical in surrounding it with the right presentation. It’s clear Turner and Hilliard Entertainment invested many hours into giving “Blackwater Shine” the needed sound. Its instrumental separation is excellent and it establishes satisfying intimacy with listeners. It’s an impressive debut by any measure.

Let’s hope we get a follow-up soon. Tony Turner’s “Blackwater Shine” is far from the typical cookie-cutter Nashville country/rock dominating the airwaves today. Turner and Hilliard Entertainment possess a clear commitment to creating authentic music capable of connecting with our everyday lives and the outstanding musicianship heard throughout the cut bodes well for his future. This will garner Turner a lot of attention for all the right reasons.

The music of Tony Turner has been heard all over the world in partnership with the radio plugging services offered by Musik and Film Radio Promotions Division.  Learn more https://musikandfilm.com