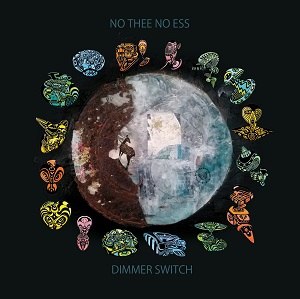 September 13, 2021 CATCH OF THE MONTH, MUSIC REVIEWS, PICK OF THE WEEK

Cardiff based duo, No Thee No Ess are set to release their latest album, Dimmer Switch, on Sept 17. The record is a fully fleshed and deliberate offering of one of the most underrepresented genres in all of music today; psychedelia. Living in what is a subjective era of absurdity, one would think that psychedelia would be a much more popular style. Thanks to acts Like No Thee No Ess, the genre could be in the beginning stages of a comeback. Dimmer Switch is a 12 song LP that fully commits to itself, with mixed results, but an overall positive impact.

On, “The Very Best Thing About Summer,” we get many of the elements that made hordes of 60’s era bands, effective. The track kicks off with a clean tone guitar, that sounds like it’s being played through a  Peavey, practice amp. This is followed by delightfully bemused vocals, that simultaneously soothe and subdue. The very best thing about summer/the lazy stretch/do it again. That line is so literal in real time, that it sounds like ice cream tastes. This one will remind you of all the things you forgot you loved about acts like Love and The Velvet Underground.

“Consumption,” is a take it or leave it track, that probably sounded like a better idea to the band, than it would, anybody else. A powerful drum roll opens the piece, seemingly indicating an intense experience on the horizon, but abruptly bursts into a commercial jingle. The best thing to say about this one is that it has the potential to be irrefutably catchy. The problem is that it is instantly forgettable, and it feels like a quick cutaway from the album. Lyrically, it seems to probe the various forms of gluttony that can consume, no pun intended, the creative mind.

No Thee No Ess have cited The Beach Boys as a major influence, and that is ultra-evident on the aptly titled, “Sunshine.” This track is a perfect example of how historically accurate the group can be, while isochronously offering something authentic to themselves. The falsetto harmonies, are like cotton candy to your ears, and the arrangement is effortless, giving you the simulation of cloud surfing. Gonna take all the of the trips/without the risk of being here, is one of the most righteously psychedelic lines penned in the last 30 years. “Sunshine” is one of the true highlights of Dimmer Switch.

No Thee No Ess have striven for art over style, here, but they haven’t abandoned the latter, or their sense of joy in the process. For an album like this to be released in 2021, should give us all hope. It’s less about living in the past, and more about utilizing some of the finest elements of a bygone era in modern music. This record is highly recommended for audiences all across the board, from boomers to Generation Y. This is the type of work that proves that the vibes of yesterday, can seamlessly glide within the current zeitgeist.