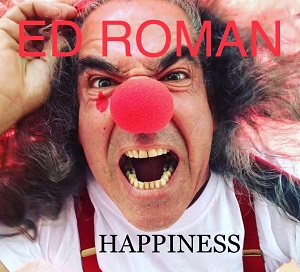 Ed Roman’s 2021 continues moving forward on a positive note with his latest single release “Happiness”. The songwriter, multi-instrumentalist, and singer is a proven success on terrestrial and satellite radio alike and his new song should have a similar, if not greater, impact. His voice has an appealing weathered sound at assorted points during the track but likewise shows itself more than capable of exploring near-ethereal highs. He rarely contents himself with pursuing one idea or motif for long. “Happiness” evolves like the emotion itself, ebbing and flowing, and matches life’s vigor with significant aural energy.

Guitar and voice are the primary instruments. Synthesizer, however, plays an important role in shaping the song’s musical character. The aforementioned guitar parts are tasty, without question, and reflective of Roman’s enormous skill with the instrument but never overshadow the mastery of fundamentals that makes this performance so enjoyable. The electronic instrumental touches have a distinct late 80’s-early 90’s flavor and fill the cut with colors it would otherwise lack.

The song, despite its relatively buoyant backing, attempts to grapple with its subject in a serious way. Roman’s lyrics are conversational but nevertheless fitting and intelligent. They are, likewise, tailored to work in sympathy with the music rather than hogging the spotlight for themselves. His vocal delivery, mentioned earlier, varies some from one verse to the next and the diversity of his voice serves the track well.

It’s a more than worthy successor to Roman’s earlier single releases. It is a template many artists have adopted in recent years, focusing on single releases rather than EP or full-length albums, It has zero effect on quality. “Happiness” is exceptional as a standalone single but, if Roman chose, it could work just as well as one of a collection’s centerpiece numbers. He’s succeeded in composing and recording a song capable of appealing to casual and hardcore music devotees alike. Let’s hope it reaches the wide audience it deserves.

His sense of craftsmanship extends to length as well. Roman never overreaches and, indeed, much of “Happiness” comes off as the product of a writer and performer who entered the recording studio knowing exactly what he wanted to say and how to get there. It isn’t difficult to anticipate many of the song’s key moments before they arrive, but they are nonetheless satisfying. Nothing feels forced or cliched and the inevitability of many moments will please even the most cynical of listeners.

There I  s precious little fault to find here. The style will either be agreeable or not your cup of tea at all. Even the song’s critics, however, must be forced to concede that Roman’s skill and professionalism are apparent from the outset and he’s spared little or no effort to fully realize this track’s potential. It is September and the year is soon winding to a close, but there’s no reason to believe we won’t be hearing from Roman again. He hasn’t let the pandemic dampen his creativity and, for that, we should all be grateful.