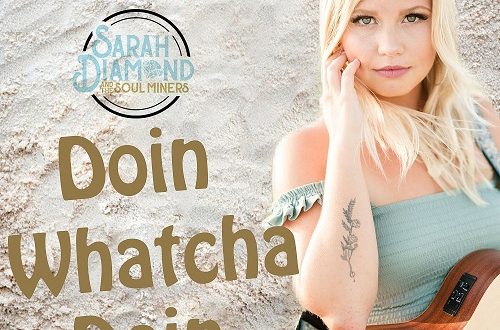 2 weeks ago MUSIC REVIEWS, PICK OF THE WEEK

To say that it’s not very often that an indie single enjoys the buzz that Sarah Diamond & The Soul Miners “Doin Whatcha Doin” is receiving today might be the understatement of the year, but that isn’t stopping country music buffs from singing the burgeoning songwriter’s praises this year.. Influenced by a mixture of old-school country outlaws, southern rockers, and even some of the poppier singer/songwriters in the underground, Diamond’s strain of soul-style roots music flirts with the experimental side of the genre but never trips into the negative excesses that come with artistic overindulgence. If “Doin Whatcha Doin” is an embodiment of her provocative style of play as a whole, then the upcoming work it’s more or less previewing in this instance is likely to be a smash hit as well.

Diamond flexes some serious lyrical muscle in this track, and touches on elements of smart, self-aware reflection without ever becoming pretentious or egotistical in the delivery of the narrative. Unlike most of the players in alternative Nashville, she doesn’t want to wow us with a lot of virtuosic vocal melodies here; rather than doing something that predictable, she instead chooses to flaunt her command of bucolic prose in the verses. There’s no arguing that she made the right choice for multiple reasons – chief among them being that it makes “Doin Whatcha Doin” so much more appealing and original than any of the output by her closest rivals both locally in the sunshine state and abroad.

The string play brought to us courtesy of the Soul Miners is super crisp in this master mix, and largely just as textured and expressive as Diamond’s actual singing is. If there’s a story to be told in “Doin Whatcha Doin,” it’s being conveyed not only through the wistful poetry that she’s dishing out from the center stage, but moreover, from the gorgeous melodies being emitted from her backing band. I hope that she keeps the Soul Miners intact when she tours more extensively outside of her scene; their chemistry is sublime, and that’s not always a given in this industry.

This multilayered arrangement of the instruments exploits Sarah Diamond’s vocal range beautifully. If she has even a fraction of this stellar presence that she boasts in “Doin Whatcha Doin” during any of her stage performances, then you’d better make sure to see her in person whenever she comes through your town on tour. Her serenade is dripping with swagger from start to finish here, and for my money, it’s on a more sophisticated level of expression than almost anything else currently being promoted by a major country music label.

“Doin Whatcha Doin” sits in the very top tier of new country songs, and I’m far from the only critic saying as much right now. This single sports a much more engaging musicality than anything you’re going to find on this genre’s vast and competitive indie circuit at the moment, and it was composed by a fresh face who shows a lot of promise as a performer. 2023 is going to be a big year for music, and this artist could be one of its more important players.