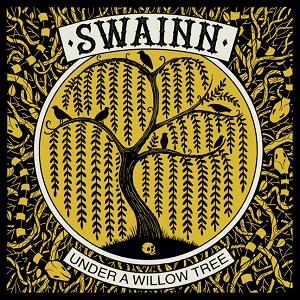 Swainn “Under a Willow Tree” (LP)

Arizona based Celtic quartet Swann’s third studio release Under a Willow Tree embraces tradition, but only so far. The four piece, also known as Cockswain, doesn’t adopt a thoroughly purist approach to their songwriting but lovers of Celtic music will appreciate their fluency with the form. It has earned them the status of well-received festival regulars. Producer Jeff Tamelier mans the boards for this new collection and his past experience helming efforts for bands such as Tower of Power benefits Swann’s comparatively minimalist attack. He frames the band’s stellar songwriting in a whole new sonic light.

The sub-genre of Celtic rock has seen a small army of practitioners in recent years so asking if there is anything separating a band such as Swainn from the pack is a valid question. The answer is an unmitigated yes. Under a Willow Tree opens with “Voices” and, outside the rave-up kicking it off and the abiding fiddle presence, the band’s sound initially owes much more to rock than Celtic folk music. The balance between the handful of styles in their music is fragile but deftly maintained throughout the track.

This continues with the second song “Bag of Bones”. It’s a good example of the elasticity of the band’s songwriting as, with minimal rearrangement, this can work in a variety of musical styles. It’s robust Celtic rock here, full speed ahead, and a guaranteed winner in a live setting. The chorus is particularly potent. Attentive listeners will note the chemistry between Neil’s vocals and Mandy’s fiddle, a key component of the opener, wields the same importance here.

“Take Action” strikes a socially-relevant note without ever sounding heavy-handed. The underlying acoustic guitar playing provides a melodic spine running throughout the song that strengthens its impact on listeners. Swainn backs off their rock inclinations for the song “Home” and delivers an acoustic track. It opens with a small bit of aural extravagance, the sound of chirping crickets, but the understated pastoral charms of the vocals and instrumentation are genuine and lasting.

The hard-driving “Sink Or Float” opens with brief acoustic guitar riffing before the full band takes over. It’s another rough and rowdy cut propelled by muscular percussion and Mandy’s energized fiddle.  Some may find fault with the band’s direction that Under the Willow Tree has such a preponderance of these sorts of songs; the talent is here to expand the band’s range further than they have thus far dared, but something is wanting.

There’s no question they do what they do exceptionally well. It makes the moments when they temper their natural musical direction, such as “Brand New Day”, even more meaningful. It has some of the album’s best lyrics and, despite the up-tempo pace, you never hear Neil glossing over the words. “Another Drinking Song” closes the release and earns points for, if nothing else, self-awareness. It avoids any of the outright rock posturing heard in the album’s earlier songs but, nonetheless, hits listeners with another loping romper with a gregarious nature. Swainn’s Under a Willow Tree is a solid effort from first song through last and shows the band continuing to refine their sound.

User Rating: Be the first one !
Share
Previous Ronnue “Why” (SINGLE)
Next Margaret Dorn and The Accidentals “A Capella Holiday Classics” (LP)