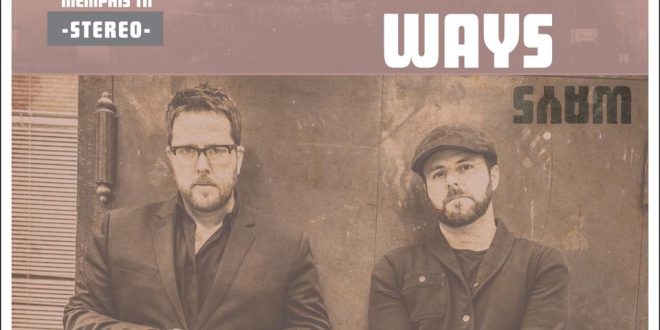 The Cold Stares are back!

The duo of vocalist/guitarist Chris Tapp and drummer Brian Mullins, under the name The Cold Stares, isn’t your everyday indie act. The pair commands national recognition thanks to their cracking blend of rock and blues. The mix they bring to these time-tested forms balances the fundamentals giving each style its enduring appeal while delivering music that sounds fresh rather than retrofitted for modern audiences. Their latest studio release Ways packs a hard-nosed wallop over the course of thirteen songs and likewise shows the continued growth of their songwriting within a familiar frame. I think The Cold Stares are far more than a throwback act; this collection has relevance rather than reveling in a dimming past and they fill each performance with edgy urgency.

The first track “Any Way the Wind Blows” has a guitar riff reminiscent of Led Zeppelin’s “Heartbreaker” and striking this sort of comfortable note for rock fans is a canny move on the band’s part. It reassures longtime fans The Cold Stares remain on course with their guitar-centric attack while bringing newcomers on board with a sound they can readily identify with before branching off in other directions later. Despite any similarities, you may hear, however, The Cold Stares are far from sounding like paint by numbers imitators.

Much of the album’s first half focuses on the duo’s rock inclinations and those are manifest during the title song. Blues is never entirely divorced from their musical vision, however, as the lyrical content for “Ways” owes a clear debt to language common to both traditional and modern electric blues. I understand why many listeners might overlook Tapp’s vocals, he has a strong voice but it doesn’t necessarily leap out at you, but nevertheless I’m quite taken with the presence he establishes in song such as “Ways”. He has palpable confidence and his voice grabs your attention enough you can consider it another weapon in the band’s musical arsenal.

There is an end of everything strand running through a lot of the songs on Ways; Tapp often portrays loss as a life and death matter and, sometimes, depicts sticking close to some of the song’s subject in a similar manner. “White Girl” is among those songs. It dives headfirst into the language of the blues and the “white girl” of the song’s title is an agent of chaos Tapp wants to ward off rather than embrace. It’s one of the more action packed musical arrangements included on the album as well.

“I Ain’t the One” features another gripping Tapp vocal. It is an acoustic track with minimal percussion from Mullins and narrates, in part, the first meeting between Jesus and John the Baptist. You can arrive at two theories listening to this track – one that Tapp is a believer and there’s some support for that based on the passion he invests in the song’s vocal. Two is he isn’t a believer or unbeliever, per se, but versed enough in blues tradition to recognize the deep Biblical roots embedded in a lot of traditional blues music and exploits them for his own art. No matter what side you come down on, “I Ain’t the One” is one of the album’s best tracks.

The album’s penultimate cut “Jackson Mississippi” is another acoustic highlighting Tapp’s storytelling skills. Another of his hard times narrators relates the story from beyond the grave and there’s not much about his tale that’s upbeat; it is in keeping with the general mood of the album and the smattering of electric guitar coloring the primarily acoustic track gives the performance an added aura of menace. “Might as Well Die” closes the release with the same meditative gloom hanging over this tune but, once again, Tapp’s narrator finds himself under the sway of a woman he can’t get enough of who leads him to his doom. The Cold Stares provide listeners with a powerful songwriting and musical experience hearing Ways and capture the beating heart of the blues for modern audiences thirsty for its authenticity.

User Rating: Be the first one !
Share
Previous Welcome to the Edge Times (LP) by Jon Patrick Walker
Next The Toronto Tabla Ensemble are back with “Dream Symposium”