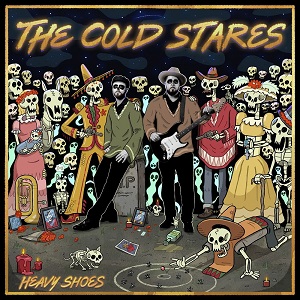 The Cold Stares’ new album Heavy Shoes finds this dynamic duo in fine fettle. The band’s ninth collection in eleven years features a dozen tracks steeped in the imagery and traditions that have been their calling card since their 2010 formation. Guitarist Chris Tapp and drummer Brian Mullins built the band’s reputation on several key factors; they are clearly blues aficionados familiar with the genre’s vast trove of archetypes. Another critical factor is the wall of sound they erect despite only being two men. The Cold Stares produce a gale storm of sound comparable to four or five individuals rather than a tandem.

The title song opens the release on thunderous note. Mullins’ bass drum has authoritative muscle and gives the cut a sturdy spine. There isn’t an array of instruments for the album’s production to capture, but the warm mix crystallizes the best aspects of the band’s aural identity. Tapp’s guitar tone is superb and Mullins’ percussion is the sonic equivalent of a boot heel kicking in a door. The muscular flex of Tapp’s voice and the grit it contains is a perfect fit for The Cold Stares and their music.

Newcomers may, at first impression, believe the band’s songs and presentation lack finesse, but their artistic vision is deceptively simple. Tapp does a superb job of weaving genre tropes into his lyrics while still filling the tracks with individualistic language; The Cold Stares has a style all their own despite the musical debts they owe. “40 Dead Men” blasts listeners with a fast-paced riffing gem. It’s even more unbridled than the opener and Tapp’s lead guitar will likely singe your scalp.

The duo is rarely content following a straight A-Z path. It isn’t enough to have a grab bag of potent riffs at your disposal; all-around great rock songwriting demands you orchestrate them in “Hard Times” has one of the band’s best ever grooves. The near-guttural riffing powering this track shifts at key points, particularly during the song’s refrain, and Tapp’s gravitas gives it added oomph.

“Prosecution Blues” is slaughterhouse blues with Tapp’s desperate vocal capping it off. He nails an impassioned guitar solo during the song’s second half. Some listeners, however, may find this to be among the album’s lesser moments as its musical trajectory varies little. The margins may be slim for some hearing this album; The Cold Stares’ close to constant salvos of traditional blues imagery may feel like a pastiche to them. Songs such as this provide the strongest opportunities for this kind of reaction.

He goes in a blues direction once again with the track “Election Blues”. It’s a timely cut, without question, but The Cold Stares thankfully refrain from laying heavy polemics on listeners. If this takes a side, it takes the one of common sense rather than any particular party. The lack of preachiness is welcome. It doesn’t adopt the same languid pace of the earlier blues tune and has one of the album’s most compelling arrangements. Heavy Shoes has something for every rock fan. Their style, without question, draws from hard and classic rock tradition, but the blues forms its bedrock and passion burns in each song.

User Rating: Be the first one !
Share
Previous YOYO
Next Robert Eberle “Where’s My Mind” (EP)