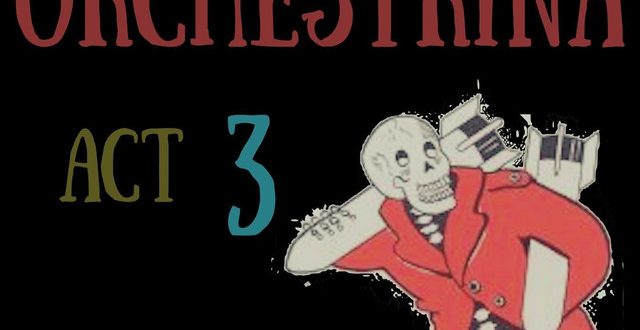 There’s a subtle, strung out set of notes quivering in the foreground. A kick drum joins in like a dying heartbeat. There’s a burst of fuzz, and before you know it, we’re off and running on alongside The Merrymaker’s Orchestrina in their song “Together,” from their new album Act 3 (available everywhere April 2018). This place where the Merrymakers are taking us to is unclear, but what it abundantly obvious is that we’d better hold on, because if those overbearing blasts of noise engrained into the beat alongside the sardonic vocals is any sort of clue, this is going to be a bumpy ride.

“Particle Craze” zooms in and takes us onto the ground level of where this band’s sound is really generated from. A tizzy of guitars and lyrics delivered through a space station-transmission draw us ever closer to the heat radiating from the amplifiers. Is this production meant to be so cryptically fascinating, or is it the band playing that is causing us to fall under this divine spell of sonic hypnotism? It doesn’t matter because by the time “Watched You Out My Window” and its exotic swing starts up, it’s already too late; our minds have melted into the speakers amid the struggle to stay above water in this swirling whirlpool of sounds.

“East of Eden” is an evocative soundscape that reminds me a bit of The Screaming Trees early work with drummer Mark Pickerel; there’s an ominous feeling that danger is creeping up behind us, but the surreally muted vibe of the music and accompanying lyrics leave us almost paralyzed in slow motion, powerless to escape or evade the oncoming threat. The Merrymakers take us careening back towards a sepia-tinted light in the proceeding “Cowboys and Indians,” one of the more fun, classic punk-inspired tunes on the record, but it’s only a brief intermission before the trio take us back into the unknown pleasures that exist in the shadowy reverb of “Enemy.” You can feel the energy they’re exerting churning out these gritty songs, and for a second, it doesn’t feel like we’re listening to a CD, but instead that we’re perhaps in some twisted, grim black and white movie to which The Merrymakers are scoring.

When we’re least expecting them to, the band shines another shade of positive grey into the cavernous Act 3 in the form of the ballad “Slip Away,” which due to its perfect placement on the album works as an almost divine intro to the four bar riff rock of “In This World, Not of It” and the companion crooners “Anarchy” and the recalcitrant “There’s No Such Thing As God.” Act 3 is very progressive in its second half, and its cohesiveness adds an elegantly textured accent to an album that is arguably a solid rock n’ roll release if I’ve heard one in the last five years. As the record winds down to a close with a combination of jarring yet oddly pastoral reflection, the narrative behind The Merrymaker’s Orchestrina’s first contribution to the American Songbook becomes undeniable. Sometimes you have to look deep into the darkness to find the brightest of gems.