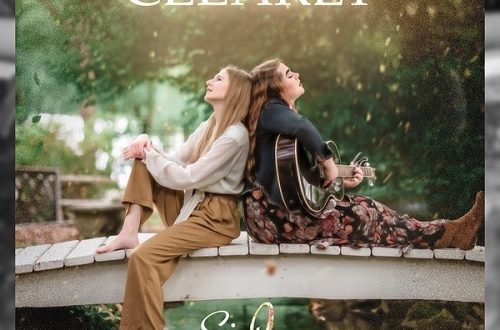 The Sisters J, collectively Lily and Elisabeth Jackson, are extraordinary young vocal talents and siblings who’ve partnered as a singing duo. The latest single from Nashville’s latest musical exports is “Clearly”, a song that marries a top-notch AOR rock backing with the sisters’ outstanding vocals and harmonies. It may sound like an incongruous match for some, at least initially, but persisting with the song reveals that their often near-ethereal voices lend an almost theatrical quality to songs such as this.

It never sounds overly plotted out or insincere. It does develop in a recognizable way, casual and devoted music fans alike will grasp onto its inevitable trajectory early on, but the Sisters J never weary you because it’s pulled off with such skill. The vocals redeem whatever over-familiarity you may experience hearing the song. Both Lily and Elisabeth are successful singers away from their work as a duo with the former placing high in national vocal competitions and the latter boasting a Honor’s musical education degree. Sisters J are in good hands with their new song Clearly by teaming up with the genius talent of famous music producer Ted “Theo” Perlman.

The lyrics are unambiguous and easily relatable. The lack of overwriting throws the burden of conveying the song’s message onto the Jacksons’ shoulders, and they stand tall under the weight. Few listeners will finish the song anything less than impressed by the natural yet obviously arranged harmonies and interplay present throughout the single. This is the well-practiced craft of two expert singers on display rather than precocious amateurs and they will only continue to get better and better as time rolls on.

The biggest musical element for many will be drumming.  It doesn’t compete with the singers for space in the mix, without question, but it nonetheless has a positive impact on the song. Backing up the arrangement with meaningful musical muscle is an astute move for the Sisters J and their behind-the-scenes collaborators. The percussion has a strong electronic tilt, but nonetheless packs plenty of snap and punch in equal measure. Many listeners will finish hearing this song eager and hopeful to hear how much higher they will soar with a live band playing alongside them.

Strip any hint of production artifice from the song and listeners are still left with a sturdy and musical song. Melody is part of the foundation for whatever the sisters do, and the arrangement never neglects its importance. Aesthetics factor into the final outcome through things such as running time. There’s no bloat in this song. The Sisters J possess a keen and canny sense of avoiding any wasted motion.

Such a complete presentation so early on is a remarkable achievement. The Sisters J are cultivating a signature sound during a time in their lives when many others are still going for their voice. First-class collaborators, of course, speed the process along, but it is possible to hear how Sisters J’s respective performances are the final arbiters of the song’s merits.

“Clearly” soars with their voices weaving magic from the first line through the last and listeners will not soon tire of their vocal sorcery. Many listeners will come away from hearing this song certain they’ve just begun enchanting audiences with their spell and have an inexhaustible future ahead of them.