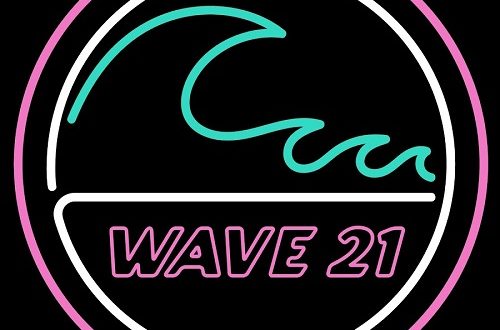 There’s something devilishly addictive about the giant beat that kicks off “Way Far Back,” and even without the presence of Steve Hill sitting in with Wave 21 for this performance, it would nonetheless feel like one of the hotter tracks on the band’s album Brace Yourself. The vocal harmonies are admittedly borrowed from the Crash Test Dummies circa 1993, but this is a song that isn’t ashamed to wear its retro influences on its sleeve. It’s a product of the culture from which it has drawn so much aesthetical structure, much as the case is with the other nine tracks on Brace Yourself.

“Long May You Love” has a thoroughly retro rock n’ roll mentality, but its easy-going indie pop swing suggests that it was never meant to be a throwback. Similarly, the firm cover of Fleetwood Mac’s “Dreams” at first feels a little instrumentally cluttered, coming to us with more string emphasis than I personally care for, only to develop into a rather intriguing track centered on its clandestine melody. It sets the pace for the clamoring conclusion in “Over the Moon” like nothing else might have, and considering the depth of the latter song, that’s quite the compliment to a cover.

“All over & Over” and “The White Wings of an Angel” share the same framework, but they don’t play out like variations on the same theme. What’s provocative about Wave 21 is that while they’re honest about their formulaic songcraft from the get-go forward in Brace Yourself, they’re not modeling this sound after specific groups or eras in the history of pop/rock; truth be told, they’re more amalgamative of the Canadian and American underground from the 1980s alternative revolution to present. They’ve got some thematic elements, but they’re not ruling the cosmetics of a song like “Whenever You’re Near” – emotions are.

Although “My Latest Song for You” and the spindly “Stay the Night” lack the weightiness of “Long May You Love” or the endearing lyricism of “Whenever You’re Near,” these two tracks capture a compositional wit that has been harder and harder to come by in the mainstream and the underground the same over the past few years. “Way Far Back” is clearly the standard in this collection of songs, as is its charming and straightforward music video, but when taking into account the diversity of the content in this record, you can’t knock the way this band has developed as steadily as they have.

“Why Does it Happen” is another gem in this tracklist and certainly as much of a single-quality listen as “All over & Over” and the aforementioned “Way Far Back” are, and all in all, I don’t know that you’re going to find another LP out of this band’s scene released in 2021 or 2022 rocking the kind of substance this album is from beginning to end. These are musicians who are deeply committed to expanding on a cultural tipping point rather than riding a fanciful trend into the spotlight, and that’s worth celebrating right now.

User Rating: Be the first one !
Share
Previous Illuminaut “Self-Titled” (EP)
Next Starfire “Dreaming of Your Destiny” (LP)