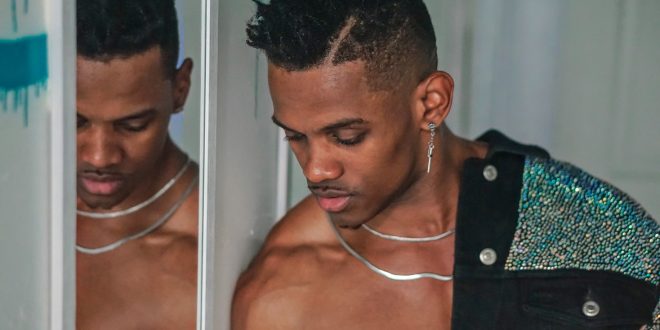 Hey! Thank you so much for this interview. It is truly an honor.

I’ve definitely had some amazing ups and life changing downs. I’d say for sure my most memorable experience was touring as the Lead singer on the 4 U Prince Tour in partnership with the Prince ESTATE. It was really a dream come true. Touring and performing is one of the things that many singers pray for. I love to tour and that was my last tour so it’s embedded into my brain until I am blessed to go on another one.

Your single  “Your Medicine” debuted in the TOP 100 on the iTunes Rock Charts. What did this mean for you?

Well the special thing about that is, not only did it debut in the top 100 but it was my debut single which made the moment even more special. Before “Your Medicine”, I had never released a song before. This moment was a moment of proof. Proof that I was overcoming my fears. Proof that my dreams were possible and proof that I was moving in the right direction.

Apart from creating music, your videos on Tik Tok are legendary! How do you come up with your videos?

Haha thank you! The cool thing with Tik Tok is there is always inspiration. As we know all art is recycled so it’s often easy for me to see something that someone else has done and make it my own. Tik Tok also has a lot of challenges which is also permission for everyone to do the same thing so it’s not difficult at all haha. I think everyone loves my Tik Toks because it allows me to show my personality.

Is there one song (either yours or from someone else) that’s most meaningful to you? Why?

Hmmm this is always hard for me. There are so many songs that mean a lot to me. The first one to mind right now is “He Lives in You” from The Lion King Broadway Soundtrack. That song means so much because it reminds me of the power we all have inside ourselves. That’s a conversation for another day J but people should definitely take a listen to this song.

Do you have any new releases planned for this year?

Yes! MY ALBUM! It’s coming sooner than the fans think.

Which artists have influenced you through your musical journey?

Recently I’ve been heavily influenced by Prince but aside from artists that influence my sound I’d say my inspirations are all women. Primarily Divas like Pattie Labelle, Tina Turner, & Whitney Houston.

Your singing career took off thanks to answering a Craigslist ad titled “Singers Needed for International Tour,” correct? Did you have a feeling that this was going to be your big break?

Yes! My answer to this might be confusing but it’s the truth. I honestly had no idea! But deep down I still knew, if that makes sense. It was like my brain was telling me I was out of my mind to think that this was possible but my soul was telling me to prepare for something new.

Do you ever get nervous before you play music live?

ALWAYS! It’s like for a second I think to myself “Hmmm what if all this shit goes wrong?” haha that typically makes me nervous but the MINUTE I open my mouth and start singing it all disappears. It’s like I feel in complete control of the world when I’m on stage.

What makes your music unique? And how would you describe it?

My music is unique because my voice is unique. I have a very distinct tone. I use to be insecure about this but now I know this is what makes me special. Take my tone paired with a fusion of the Rock, Pop, & Soul Genre and you have my music J

What can fans expect from you this year?

A New Album and hopefully a few more surprises along the way! Please follow me on Instagram @StoryOfAlonzo to keep up with the Journey!