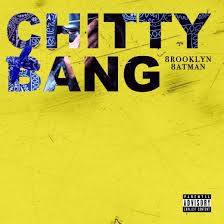 2020 has been a particularly good year for hip-hop, and you needn’t look much further than the American underground’s latest dispatches to see exactly what I mean. For rappers like 8rooklyn 8atman, it’s never been a better time to be breaking into the game; the upstart player’s new single, “Chitty Bang,” is bringing in a lot of buzz at the moment, and I can absolutely understand why. With an edginess that tips its cap to the retro era in rap mixed with a chic cosmopolitan experimentalism reminiscent of Roddy Rich, 8rooklyn 8atman is establishing himself as a serious heavyweight here.

There is a lot of swagger in the demeanor this artist brings within him into the recording studio, but I don’t detect any specific instances of arrogance on his part in “Chitty Bang.” 8rooklyn 8atman is pretty solid about keeping the tone of his verses somewhat separate from the flow of the instrumentation as to yield some additional contrast as we move towards the middle of the song, and in doing this he makes it hard to decipher what he’s being literal about and what’s poeticizing. No matter which way you slice this, he’s going deep – and cratering us with mad linguistic skills.

This master mix is one of the most angular I’ve heard from an underground player this year, but that doesn’t it make it abrasive by any means. Actually, I think that the levels in the instrumentation let the music in “Chitty Bang” tell us as much about 8rooklyn 8atman as any of the verses he raps do. It’s pretty outside the box to incorporate an elaborate strand of elements into a track as (otherwise) straight and to the point as this one is, but that could be why I’ve taken to it with as much zeal as I have lately.

Despite the beefiness of the instrumentation here, the vocals are always in the spotlight as we make our way through the grooves contained within “Chitty Bang.” With his delivery as smooth and on-point as it is around every twist and turn in the composition, it’s surprising that 8rooklyn 8atman hasn’t already released a couple of different versions of this song already, especially considering that his voice is what makes it so gripping. He should definitely try out some stripped-down material in the future, and I would be greatly surprised if I were the only critic suggesting as much this June.

I only just recently found out about the music of 8rooklyn 8atman through an industry colleague, but the potential that he has as an artist is absolutely unmistakable. “Chitty Bang” exhibits a couple of rough edges that can eventually be sanded down if he sees fit, but for me personally, I don’t think he needs to be worried about changing a thing about his artistic direction. This is a good time to be in the rap game, and from the looks of this new single, a good time to be the force that is 8rooklyn 8atman as well.