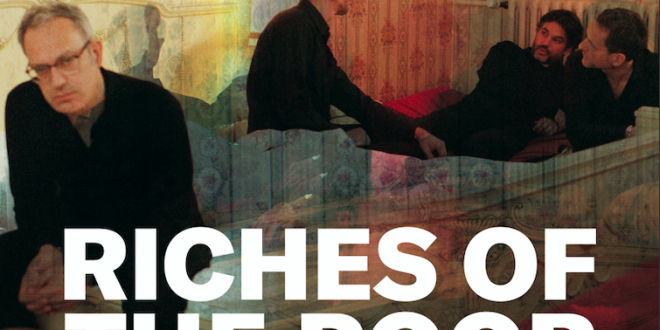 Riches of the Poor “The Long Way Down” (LP)

On the back of a textured guitar melody, we suddenly find ourselves in the trenches of a majestic groove as “Behave,” track one in the new album from Riches of the Poor titled The Long Way Down. The tone of the instrumentation suggests that catharsis isn’t far away, but at the same time, the smothering feel of the growing harmony tells us something completely different. Things are just getting to a point of consistent stability when Riches of the Poor rip the carpet out from beneath our feet in “Please,” signaling that their primary focus in this album has much less to do with establishing a particular sound they want to be known for than it does pushing the boundaries as much as they can from inside a studio.

“Morning After” picks up the post-metal harmonies of “Behave” and advances them into a surreal dreampop territory that I wouldn’t have thought possible with another band at the helm of the track. This song isn’t the slasher that the potential smash “Anything Else” is, but let’s face it, not many tracks could have been. “Anything Else” brings us into the full-color dynamics of Riches of the Poor without any safety net to prevent the band from going too far to the left of the dial, and in my opinion, the results of their experimenting here are beyond excellent. They aren’t just unafraid in The Long Way Down – this German band is downright fearless to the very end.

“Not Enough” pushes forth from “Anything Else” into all-out psychedelic rock, paving the way for a grungy power ballad in “Again” to rock us with its extended vocal harmonies – the best of which come just before the falsetto finish around 1:40. The walls start to close in on us as “Needle” comes into view, and while the percussion ebbs and flows with the movement of the strings (instead of the other way around), there isn’t any one element in the mix that outshines the others here. Riches of the Poor seem disinterested in the notion of bundling their sound around one particular attribute, and where some critics might consider this too avant-garde for the mainstream, I think this is exactly the type of attitude that pop/rock needs in this new and exciting decade.

Pendulous harmonies and screeching white noise that trails off into infinity conclude the latter half of “Home,” the final song on The Long Way Down, but this final strand of chaos doesn’t somehow minimize the impact of the LP’s simpler moments. Riches of Poor might not have meant to do as much, but in this debut album, they bring together a lot of the best elements in post-punk, alternative rock, dream pop and even noise music without sounding full of themselves for doing so. They’re touching on some textures I’ll be wanting to hear even more of in the next year, and if you give their album The Long Way Down a listen yourself, I think you’ll understand why I like it as much as I do.

User Rating: Be the first one !
Share
Previous “Chitty Bang” (SINGLE) by 8rooklyn 8atman (feat. Dre da Most
Next Johnnie Mikel’s latest release “Nothing to Lose”