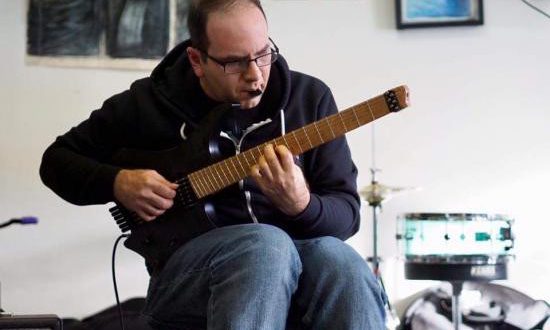 That’s a good question, I would that my music is the result of putting Bill Frisell, Jim Hall, Pierre Boulez, Ernesto Cordero and Neurosis on a blender. I usually try to explore different genres jazz, classical, ambient, free jazz and experimental.

I want them to learn something new, most of my projects are influenced by a concept, whether is Phenomenology or Color Theory, I’m always trying translate any new concept I learn into a musical context.

I’m currently based in MA but also play a lot of shows in NYC.

Even though both scenes are different, I enjoy both of them. Lots of interesting artist, lots of good memories.

I have always in different music related projects (incidental music for theater and documentaries) but it wasn’t until I release my 1st album that I really understood that I needed to pursue music full time.

I saw godspeed you black emperor in NY; that was an amazing experience. I like a lot of things about playing live but I guess the one that I love the most is making people come together in space and forget about everything that is wrong with the word.

All the songs on my latest cd are special to me, they are inspired by the poetry Gabriel Don. I guess if I had to choose, I would say Poème sans titre XV

How have you evolved as    an artist over the last year?

Last year I played a lot of shows with a lot experimental music acts, that helped me a lot to learn how to read the crowd and adapt to every situation. My goals has always been to be diverse enough to play at Carnegie Hall or at Saint Vitus Bar.

Too many to list; but I guess talking with Debussy, Satie or Stravinsky would had been very interesting.