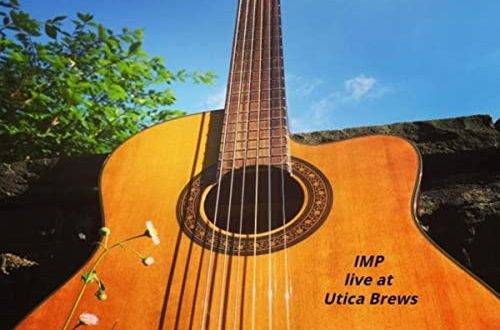 In the darkness that seems to wash over us in the first ten minutes of the extended improvised jam session that is Ian C. Bouras’ “IMP (Live at Utica Brews),” there are shards of a melody that never fully join together and yet remain stoically connected through a broad conceptualism. Bouras, a voiceless figure behind the guitar on the stage at Utica Brews, sounds as though he’s searching through the sonic wilderness for a satisfaction that is as divine as it is entirely more decadent than most of us would ever know what to do with. His exploration will last almost an hour, and we’ll be along for the ride in what could qualify as the most rousing live ambient record I’ve listened to in the last year or so.

As we discover the middle portion of “IMP,” there’s a hybridity to the music that begins to become more obvious at this juncture than it is at the start of the track, but this doesn’t create a separation between the two acts at all – the exact opposite, truthfully. Even when Bouras is trying to meld multiple elements together in what feels like a religious ceremony of non-rhythmic melodicism, there’s a feeling of calm and control that comes from his actions and the music they ultimately produce for us here. The stage is no different than the studio in this regard, as his abilities remain consistent and very reliable to the listeners (as well as critics like myself) in either setting.

“IMP (Live at Utica Brews)” gets to its conclusion in what feels like the most atmospheric and unconventional string of events to ever transpire in a Bouras recording, but the melodic faceting never comes undone. There’s simply too much passion, too much of an undying love the ambient arts for that to take place here, and although his disciplined approach is what inevitably casts the mood in this piece, Ian C. Bouras’ use of colorful string play at a sluggish pace also influences the emotion in the material as well. He’s a multidimensional musician if I’ve ever heard one before, and whether the New York underground gives him the credit he deserves or not, I have a feeling the international experimental circuit is going to look upon his latest release with special favor this month.

I admittedly wasn’t following Ian C. Bouras’ career as closely as I should have been before getting into his collaboration with Dion Abraham, Refractions of Sound, just last year, but with “IMP (Live at Utica Brews)” I feel compelled to treat his output with the respect it earned as far back as 2014’s Two Sides to Every Sunset. There aren’t many experimentalists that are working with the kind of talent he is, and in this most recent work, he’s not letting anything stop him from giving us the biggest and most accessible live recording he could muster with the equipment he’s got on hand. A five-star release, “IMP” is evidence of Bouras’ eminence as an improvisational artist and modern ambient wizard.