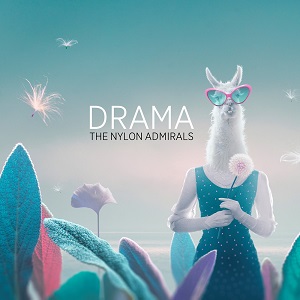 The first couple of seconds that precede the deluge of percussive storming in “Flutter for a Day” are steeped in the warmth of piano keys. The delicate nature of this opening melody is anything but indicative of what The Nylon Admirals’ new LP Drama is truly all about, and yet it forms the sort of unforgettable introduction that will stick with us throughout every twist and turn this thirty-five minute album has to offer. From the gust of this initial groove to the suffocating sonic plunge that comes next in “We Were the Romans,” it’s obvious from the jump that The Nylon Admirals are one band from Seattle that definitely means business in 2020 – and their debut is incontrovertible proof of as much.

“From Simbel to Scutari” clocks in at a little under six minutes in total length, making it the most sprawling song on the LP, but it doesn’t feel particularly long beside the dwarfed “Superluminal” at all. Though more exotic in stylization, “From Simbel to Scutari” isn’t quite the textural best “Superluminal” is, and when listened to in the same session, it’s hard for me to picture either of these tracks being separated from one another in a different arrangement of the material here. The Nylon Admirals thought a lot about how they wanted Drama consumed, and in this format, it’s nearly impossible for listeners to turn away from the epicenter of melodicism before the whole of the record has come to a conclusion.

Just when you thought things couldn’t get much stranger in this tracklist, we fall upon the Opeth-style string play of “Oyster,” only for the song to suddenly transition into a war of hip-hop aesthetics about forty seconds into its running time. This is easily the most ominous and threatening piece of material on the LP, but hey, it’s also bringing more attitude through the speakers than most anything else I’ve reviewed in the electronica genre in the last few years has. An operatic “The Blind Watchmaker” takes us back into the meditative arms of something more ambient and peace-loving, and despite the differences between these two songs, we segue from one to the other as though they were somehow connected in the same heavens from which all music was originally conceived.

“I Have to Go Now” stylishly greases the wheels for our finale in Drama, a Japanese-style cover of “Black Hole Sun,” and while this concluding track is by far the biggest oddity in Drama, it’s a song I must have listened to three or four times through the first time I sat down to review this LP. There’s no need for debate – The Nylon Admirals are one of the weirdest bands you’re going to hear this summer, but their affectionate hybrid of Ween-influenced aesthetics and Aphex Twin-grade electronica is perhaps one of the most exciting fusions I’ve had the opportunity to study in recent months. I’m very encouraged by Drama, and with time, I think this group is going to make even more compelling music than they already have in this debut.