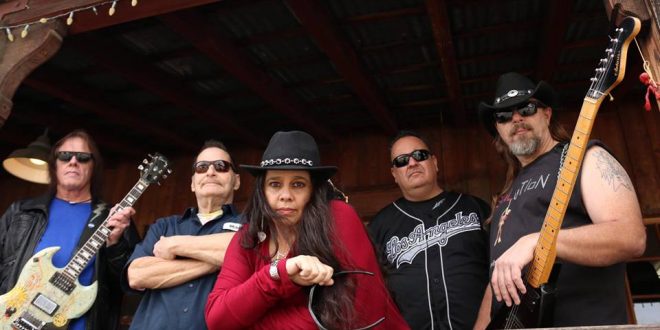 Hello REVILUTION! You posted a teaser that you were working on a new album. Very exciting. When can we expect to hear new music?

Marie B, vocals: Hello! New music is currently being created. As far as an exact date of release only the METAL MUSIC Gods know. There are too many variables at this time for a target date. We would like to do some live concerts while we write. You know, get the songs super tight and then lay them down in a recording once we have ten fresh songs.

Scott Flint, guitar, vocals: We have some really exciting music for the album, everyone is gonna be surprised.

Dan Seitz, vocals, guitar: We recently sent some demos to our manager, Birdee Bow. She picked two that she thinks would make great singles, so we’re going to look into recording and releasing them.

What is the process of writing and recording new music like for the band? Do you all bring separate elements?

Scott: We usually all bring something new to the table, then as a band we create new music with everyone’s input.

Marie: The writing process is different this album than ever before. This time we have Scott writing too. He writes and records what he hears in his head. Then he records the instruments and brings them to the studio and we (me and Dan) listen to it. For me, I hear the overall sounds of it without the lyrics. Does the beat and the guitars go together. Then, I don’t have any idea what Dan hears but he hears it with a composers ear. Then he goes in the studio and yells. He has me go in there and listen to what he did and it sounds good. (If there are any sounds that I think aren’t right I collaborate with him and see what he thinks.) Then I say okay do you want a backing vocal on it and where. I go in and practice a few times then record it, listen to it, critique it and make corrections on the sound from there. To start. The process is different if I write a song or if Dan has one he wrote. He’s the best at expressing an entire song because he can play all the instruments and do vocals and backup vocals.

Dan: We’re very collaborative, but usually it starts with someone bringing in a basic idea or demo that they worked up at home. We’ll start out learning and playing through whatever is already there, then try to flesh it our further; if we come up with a second guitar line, or another verse, or whatever, we’ll try to work it in and see if it flies.

Do you ever perform unreleased songs on the road before you release them or do you save that for when the album drops?

Scott: We do both, we like to get audience input before putting a song on the list, and other times we just add a new song as a surprise, a roll of the dice.

Marie: In the past all the songs were already written and released before we performed them live. This time we have played the new songs in front of an audience before they’re recorded and released. Great question!

I’m sure this is going to be tough, but if you had to pick one – which of your songs you have released or yet to release if your favorite?

Marie: Wow…to pick just one. For me, I’d say I like the song GirlStuff. It’s a great song with every element needed for a song that will last for all time.

Scott: I would have to say “GirlStuff.”

Dan: Personally, I’m pretty partial to “Phantoms,” but that might change as we come up with new material.

How do you agree on a set list as a band? You have so many great songs, who gets the final say?

Scott: We all decide what songs go on the set list, in the end it’s a unanimous decision.

Marie: Dan usually has final say on the set list. He knows how to put the songs in order for an entire show so they flow well. He does ask what we want to do and then makes it from there.

Dan: I like to let the band decide which ones they want on the list, but I also go by what seems to work well at the shows. Of course I have a couple of favorites that I want on there, but mostly I just try to arrange the songs for the best flow live.

Marie: Yes. Thank you for taking the time to read our interview. No matter what happens in the band we just want to make the best music we can to entertain the listeners. You can follow us at our band links. I do my best to interact with all comments since I admin all the accounts. Except the Reverb Nation which Scott manages. I like comments about you and what you like. One time I had recorded our band rehearsal on my cellphone and had a listening party on Twitter for my Jeep Mafia friends after band rehearsal. You never know what can happen.

Tell us where to find you online to follow and support you!

Thank you for your time!
Marie: Thank you for the interview. You had some great inquiries. Happy new year. 2020 is gonna to be unprecedentedly awesome.