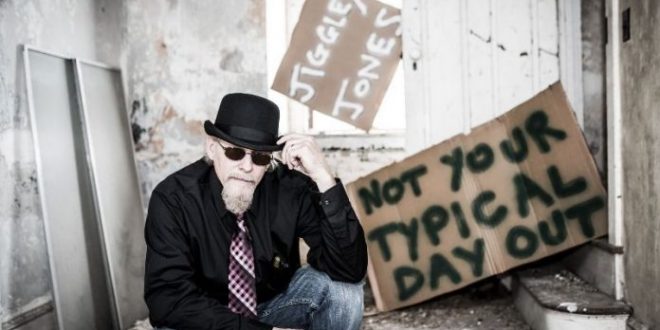 Today we are sitting down for an interview with acclaimed Folk/Americana recording and performing artist, Jiggley Jones, to find out a little more about him and what’s going on in his world.

He is an award-winning singer/songwriter in the alternative-country/folk/Americana genres of music. He is recognized as one of the most accomplished and unique singer/songwriters emerging today.  His music paints a picture and also demonstrates a discernible commercial edge that, still, never caters to the listeners. His new single Truth Seeker is a listen for music lovers with a discernable taste for original, yet not necessarily typical mainstream songs. Jones will always be himself, and nobody else.

In what city, state and country do you reside?

I reside outside of a small city in Pennsylvania (USA) called Coatesville.

How long have you been making music, and what is your favorite part of it

I’ve been involved in creating original music for well over 20 years and I enjoy just that, the creative side of things the most.

In what genre or style would you classify your music?

The toughest question of all, haha. I just write what comes out without thinking about it too much but I’m usually placed in an alternative/indie version of Folk Rock or Americana. Along the way some have placed me on the fringes of Country. Adult Contemporary might also be a good place.

Who are your top 5 musical influences?   Also, please tell us who inspires you?

I have always listened to a variety of music in my life including Motown, Classic Rock from the 60’ and 70’s, 80’s stuff like Tom Petty and The Police etc… and some of the more raw stuff from the 90’s like the Seattle thing. Any artists who just let their true self come out naturally are inspirational to me. Sadly there seems to be less and less like that.

What do you want your fans to take from your music after they leave the venue where you have just performed?

I always hope that they come with an open ear and an open mind. If so, they will leave knowing that what they just heard came straight from my inner self and wasn’t contrived in any way.

Playing live to me is where you throw the passion in the mix and let ‘er rip. There’s something special about that. A Jethro Tull concert that I went to way back in my youth always stands out to me or maybe it was just the party beforehand that enhanced the experience, lol.

That had changed from one song to the next throughout the entire recording process but I do like the artistry of the song “Warm.” A couple people have mentioned what they thought there was a Beatles influence in that one.

I have really made a point to take a breath and step back to basics with my vocal approach. The vocals come first and sometimes you can lose track of that. So I have evolved into what I think is a better singer.

If you could meet, play a gig with, co-write a song with, have dinner with or have a drink with any band or artist (dead or alive) who would it be?

Without hesitation, Led Zeppelin of the mid 70’s (their prime).

How many songs /albums have you released to date?   Would you mind naming them and telling us a little bit about them?

My first release in early 2013 was “No Spring Chicken” which was a 4 song EP that included a Christmas song believe it or not. This collection is still going strong for me on Spotify. The second was a 6 song EP recorded in Nashville on the Lamon Records label. The title was “A Mountain, A Struggle, A Tunnel, A Light” and the release date was mid 2014. Prior to my latest album I released a single by itself called “Truth Seeker.” This song was originally going to be on the current album but I decided to let it go early to fill the void in time between the 2nd album and the new one. The new one that I speak of is “Not Your Typical Day Out” which took 2 years to record. There are 10 songs on this full length album and it’s just starting to gain some headway after a college radio campaign and some really great reviews.

Can you tell us about your latest release and the background/inspirations behind it?

“Not Your Typical Day Out” was quite the project since I engineered, produced and mixed the thing myself. Sometimes I wish that I had named it “Thousand Piece Puzzle” because that’s exactly what it was like putting it together. I had written 12 songs initially for it but dropped one along the way and released the other as a single beforehand. A few of the songs where written awhile back and the rest were new but all were inspired by life itself. I am a family man so since that is how I’m looking at life now those images come through quite clearly on the album. I had a dozen different musicians playing on the record and that was the fun part. The rest of the time it was me stuck in a small room with headphones.

Whose music do you listen to?  Who are your influences?

These days I scan the radio waves for something that doesn’t seem like the same ol’ thing. I have to say though I don’t tire easily when it comes to older rock like the Eagles, Steve Miller, Neil Young etc… Some of the newer stuff would be The Avett Brothers, The Lumineers etc…

Where would you place yourself in the “Sounds Like” category?

That’s tough. I usually leave that up to everyone else. I’ll try by saying a cross between The Beatles/Dave Matthews. See that’s what you get for asking, haha.

How have you ended up in the music industry?  What would you be doing if you were not a musician?

The love of music and a passion to create put me in this position. If I want to get it out there to the masses then I have to involve the music industry. I’m already doing the other thing and that is being a parent. It’s the most rewarding, yet difficult job on the planet.

How do you and your musical style differ from other artists?

I think it’s the way I phrase my arrangements musically and the vocal approach that I have. My understanding of rhythm is the key though. My first instrument is actually the bass guitar.

What other hobbies or interests do you have?

I love NFL football and studying the Civil War believe it or not.

Tell us more about your upcoming project or this new project?

As of right now all my musical energy is focused on live performance. I think it would be cool though to put out a 5 song EP of just acoustic songs. Maybe a little percussion in there and a little bass guitar but mostly a lot of vocals and some acoustic guitar.

Has your new album or single received any significant radio airplay?

I was getting airplay on 50 plus college radio stations around the country and in Canada. It’s hard to track that now since the promotional campaign has come to an end but I’m hoping that I made enough of an impression to carry on.

Can you tell us all of the music distribution portals where your music is available?

Of course the big thing these days seems to be Spotify and yes all of my music is available on there. Pretty much most, if not all digital outlets have my stuff so Google it and I guarantee you’ll find it.

Can you have increasing commercial success and retain your artistic integrity?

I think you can if that’s what got you there. Keeping the artistic integrity means that you have to be able to persevere since having your own “sound” usually takes longer to grab hold.

I assume you use Spotify to promote your music.  How are you doing there and how can fans find you on Spotify?

Whoops, I already brought that up. I’m doing fairly well on Spotify but of course there’s always room for improvement. Just Google “Jiggley Jones on Spotify.”

What’s in the pipeline after this project?

The sky is the limit because there is no plan right now other then the current release and anything tied to that. I like that freedom of movement.

Thank you for your time and may you continue making great music.

It was my pleasure that’s for sure. Thank you for the things that you do. You might be surprised at how truly important these kinds of things are to the independent artist.