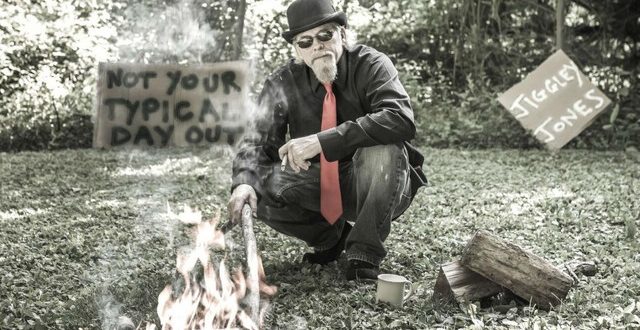 Jiggley Jones – Not Your Typical Day Out

Jiggley Jones – Not Your Typical Day Out

Whether trotting through the darkness, the light, or the strange places that lie in between, Not Your Typical Day Out, the new album from critically acclaimed alternative singer/songwriter Jiggley Jones, is a brilliantly experimental interpretation of modern folk music. As its name implies, Jones’ first full-length offering is not your average pop/rock record in the slightest. Combining complex arrangements, time signatures and layer after layer of strings that cover us in an audiological blanket, Not Your Typical Day Out is a delicious slice of Americana’s mostly unknown left field.

Jones split his recording time between rural Pennsylvania (his native stomping grounds) and Los Angeles for this album, and the influence of the two landscapes and their contrasting ways of life is really evident in a couple of the tracks. The peaceful countryside finds its way into the opening song “Danger Island” and the hypnotic “Del Alma” comfortably, but neither ever feel like straight up Nashville songs. There’s too much color and diversity in Jones’ approach to classify Not Your Typical Day Out as a country album, and labeling it as an alternative record seems a bit limiting, too. “Wide Awake” feels like a southern blues jam and suddenly shifts into an exotic, Spanish guitar showcase. The introspective ballad “That Pearl” features vocals that sound like a transmission from outer space, an obvious accent of the distance and yearning we can feel in our singer’s voice. “Warm” has the swagger of an R&B track wrapped into a bluegrassy folk song. There is such a plethora of influences and genres to sample from that I could go as far as to describe this record as radio-accessible avant-garde.

As someone who has been in love with guitars since childhood, I can vouch for Jiggley Jones’ legitimate passion for the six-string after listening to Not Your Typical Day Out, which even in its elaborate experimentalism is very much a gloriously guitar-driven album. The warmth of the additional strings on the record add a unique depth and vulnerability to the finished product, not dissimilar to a tightly conducted symphonic piece. There’s a mischievousness to the basslines that lends a healthy dose of attitude to the record, and when coupled with Jones’ ironic lyrics, the result is an LP that delightfully pushes the boundaries of “acceptable” surrealism in popular music. Is it the Velvet Underground go to Nashville? No, but only in the sense that there isn’t a pretentiousness to Jones’ style that creates self-indulgence or unnecessary bravado. That said, much like the Velvets, Jiggley Jones’ compositional experiments are defiantly memorable, provocative tunes that speak to something almost spiritual in us as human beings. Not Your Typical Day Out is both a phenomenal introduction to his sound for fans that aren’t familiar with his work as well as a relentlessly intriguing addition to his already fascinating discography. You can learn more about Jiggley Jones and his artistry online at his official website, Twitter page or YouTube channel. His discography, including Not Your Typical Day Outis available on iTunes as well as streaming on Spotify.