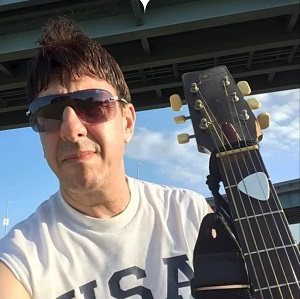 Who are some of your greatest music influences? Who do you love?

How would you describe your sound?

I try not to be redundant. The “EVERYTHING IS DIFFERENT” CD is a good example. There are songs on that disc in a variety of styles, including doo-wop, Americana, prog-rock, blues rock, and reggae. Even a jazz standard (not my composition)

How did you get started in music?

Started learning piano at age three with my father, an award-winning composer and professor of music at NYU, studied theory and composition with him and at Queens College. Studied jazz piano with Walter Bishop, Junior.

Started guitar at age 9. Went from garage bands to high school dances to clubs, playing covers and originals. Never studied singing but they had to let me sing because I was the only one who could remember all the words.

What gets you motivated? What inspires you?

Interesting people, stories and situations. Playing and recording with other musicians. My beautiful wife.

What do you want to accomplish with your music?

Give people something interesting, original, and intelligent to listen to. (Dare I say, for a change.)

What’s the one performance or professional moment that stands out for you?
Well, here are a couple..

1. Doing a solo gig at a club in NYC and having Sylvester Terry come up to me and ask to sing “He Ain’t Heavy, He’s My Brother” with me, then having a beer and discussing songwriting and “the scene” with him and Pete Townsend.

2. At a McCartney concert I handed Paul’s guitar tech a copy of the “Tempest” CD, which features my solo piano version of “The Long And Winding Road”. I jokingly told him to have Paul meet me after the concert so I could pay him the rights fee for recording his song, Still waiting for Paul to show up but I’ve often wondered (dreamed?) that when Paul put out the “Let It Be… naked” CD a few months later, that my stripped down version of his song was what gave him the idea.

What are the main themes or topics for most of your songs? How have These songs evolved over time?  Please tell us all about your latest album in   detail.

Most of my ideas come from reading (“Coke Stevenson”), from lectures I attended (“The Waters of Lethe”), and from people and situations I encounter or hear about. Sometimes a musical idea comes to me while I’m sleeping. (My wife has learned not to be shocked when I jump out of bed at 3AM and start writing things down.) I also make it a point to avoid cliches and avoid saying the same thing twice.

My latest CD, “Songwriter,Volume 1” is a collection of songs that I wrote between the ages of 14 and 28. We recorded it during 2018 and 2019. I did all the piano, synth, acoustic and electric guitar parts and all the vocals, with my old frined Nelson Montana doing all the bass and drum tracks.  Volume 2 is almost finished.

What has been your biggest challenge as an artist?

Staying relevant musically without selling out.

Sometimes it starts with a musical idea; a riff or a chord progression. Sometimes an idea for a story comes before the music. I have a “wall of ideas” with a lot of these snippets pasted and tacked on there. Sometimes I’ll take two or three of these and see how they might work together, Might be a couple of musical ideas or two different sets of lyrics, or a chord progression that goes with an idea for a song title.

What is “success” for you?

There are different levels of success. I’ve played for thousands of people and probably taught a few thousand as well. The next level of success will be exposing more people to my music.

How can fans gain access to your music? Do you have a Web site or Distribution on iTunes – Amazon – anywhere else ?  Please list all URLs

My music is available in CD and download on itunes, spotify, Amazon, and pretty much every other platform. I’ve gotten over 25,000 total hits on youtube, I’m on instagram, and my web site, which is badly in need of an update, is www.joepiket.com. Or you can just google my name. I’m the least technical person I know, but I know it’s all out there.

Are you using the Web for promotion? If so, how?

What advice would you give to up and coming artists?

Learn theory, learn to read music, study composition. There area  lot of great players who have no idea how to be creative. Trying to be a songwriter without a complete musical education is like painting in the dark using only three colors.

When’s your next record and why should people listen to it?

Next CD will be “Songwriter, Volume 2”. It may be out in time for the holidays. People should listen to it because it is interesting musically and lyrically, and it is better than most of what is out there.