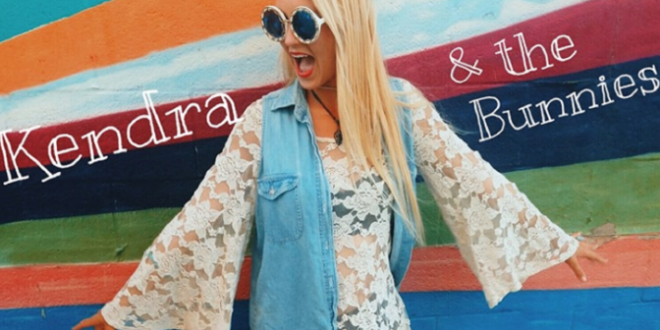 Kendra and the Bunnies

We have Kendra from Kendra and the Bunnies with us today! Welcome and thanks for your time.  Let’s start with the band name – tell us how you landed on it?

It’s a combination of the White Rabbit from Alice in Wonderland meets a fluffle of Playboy bunnies. Recalibrating how I feel as a woman in society by balancing it next to the discovery found whilst chasing myself. Also, I’ve gone by Kenbunny for several years, but Kenbunny sounds like a pop-star name. I write rock ’n roll folk music, so I picked Kendra & the Bunnies to warrant a full band.

You have a new single out that we are loving titled ‘Silent Sleeper’. Tell us what it was like writing this song? What is the story behind it?

“Silent Sleeper” is a dreamy and comforting folk song with country influences. The message of the track comes through the mode of a guiding force. Upon finding the main subject of the song, the spirit wakes the character from their dream to help actualize it. Writing this song was pretty cool in the way that I wrote the lyrics a couple years ago, when I was in a totally different phase of my life. It feels full circle to then be releasing the composed and realized final track now. As if to reflect the message of the song itself. We all start where we start and then move forward.

We must know – will you be releasing more new music as well?

Yes, I am currently bringing together a few musicians to make up the bunnies, and I am scoping out studios to record. This next music release is titled “of Thank You”. It is a rock-americana album centered on how I view my place to be in America. Who are we when we strip away media? Do we really know ourselves?

When you are working on new material, how long do you work on it before you release it? Do you ever truly feel like you are finished with a song?

Since I write a lot of poetry and literary work, my albums seem to come to me in themes. The first album “of Vinyl” is about love. My EP “of Always” is about reconciliation and forgiveness, and “of Thank You” is about historical anecdotes through the means of freedom and new-age folklore. Each project has a story arch, and so the songs come to me, I write them, and I see where they fit in the scheme of my artistic expression. Songs gain depth over time; every time I play a song, especially live, it brings with it a new experience.

A couple of my recent favorite places to play: Be On Key Psychedelic Ripple in Denver, CO. It is a Grateful Dead themed club with vintage memorabilia everywhere. Dead Lightning Still Works in Harrisburg, PA. It is a Grateful Dead themed distillery. Music Inn World Instruments in Greenwich Village, NYC, which was founded in 1958, and in Los Angeles, The Mint. Dream stages: Red Rocks Park & Amphitheater, Hollywood Bowl, The Fillmore, Terrapin Crossroads, The Capitol Theatre, and Garcia’s to name a few.

Where can fans catch you live and find you on social media?

Thanks for inviting me to interview today! I frequently play in Los Angeles, as I am based here, and I have a few shows coming up in the area this month (March). I am playing San Francisco and NorCal shows in April and May. I will be playing Texas in June 2020. For a full list of upcoming tour dates, visit my website. Be sure to sign up for my email list from there, so you can stay up-to-date! [https://kendraelisabethmuecke.com]