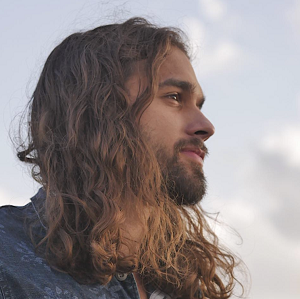 I would say my music doesn’t necessarily fall under one classification. I feel that it has some strong reggae/rock influences but it also definitely has some Latin and roots styles as well. I think you’ll hear that even more in the tunes to come!

I want fans to walk away after a show or a listen feeling better than they were. I believe all music is a sort of medicine that can be the difference between a bad day or a good one. That’s what is most important to me above anything else.

Overflowing! Haha, there is a lot going on. I live in Los Angeles and that has its positives and negatives.

But it’s great in a sense to be able to go out to a show (pre-quarantine) any night of the week and get inspired by somebody. It makes me so happy to see that artists are still releasing music, still writing, and pretty much doing everything but play live shows. It’s just so motivating- I’m rooting for them all!

I was around 12 years old when the fever hit me. It’s one of those things that I couldn’t really avoid. If the life of an artist is chosen for you, you can’t not create. If the universe puts that paint brush in your hand, you’ll paint without even thinking about it. It’s the most natural feeling in the world to me, still.

The best show I’ve been to was definitely Fishbone. Those guys don’t show their age one bit!  They’re still just as wild as they were decades ago. Playing live never gets any less exciting, I’ve been very lucky to play some great tours with amazing crowds. That kind of energy sticks to your soul forever.

I think “Beyond” has to my favorite release thus far, the song practically wrote itself. I think what I really enjoyed about it the most is that the song is about looking at the big picture. Not just falling in line, but becoming the best version of yourself- A leader in your own way.

I feel my artist development was more focused on patience this year. Being that live music has been shut down for most of the year, I had to reevaluate my plans just like so many artists have. But I’m also grateful for the challenges because we remained incredibly positive and still got a lot done this year. When the time is right to get out there, I’ll be ready!

Hmm… I would have to say Mr. Reggae himself, Bob Marley. There’s just so many wisdoms and stories that he had, I would be so curious to pick his brain.

Aside from releasing some great songs we’re gonna’ take it day-by-day and see what the near future holds. The plan will hopefully be to start playing live shows again and maybe an album release.