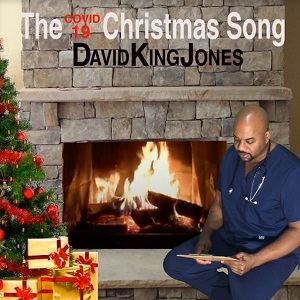 In his new single “The Covid 19 Christmas Song,” David King Jones is taking on Christmas music in a different way than his peers and getting as real as it takes to breakdown the truth this holiday season. 2020 has been a year unlike any other in recent memory, mostly for all the wrong reasons, and in “The Covid 19 Christmas Song,” Jones is lamenting the loss of the last twelve months with a boldly brooding R&B ballad that seems tailored specifically to indie fans. There’s no sugary commerciality here – if there was, I don’t think its sting would be nearly as potent.

Lyrically, “The Covid 19 Christmas Song” is a pretty straightforward single that doesn’t venture too far off of the mainstream path; however, in terms of the way it’s presented to us, Jones is an experimentalist of the proudest strain. He’s meticulously careful and actually even a bit hesitant in a few different instances here, and while I don’t know anything of his prior to this single, I get the feeling he’s a disciplined person in the way he approaches everything in life. This isn’t about cutting loose in the studio – he’s focused and very deliberate in his movements, which is something I can only hope to say about his peers in 2021.

The master mix is a little hazy for what I would normally expect out of this kind of a single, but I can also appreciate where it might have been an intentional feature conceived by Jones himself. In an effort to echo the theme of uncertainty as we find it in the music video for “The Covid 19 Christmas Song,” he’s filtering everything through a couple of layers as if to cloud the definition of the instrumentation – and thus make it harder for us to predict what’s coming around the corner next. It’s really provocative and absolutely contributive to the narrative in general.

This tension between the vocal and the beat in the backdrop only swells as we press on in the track and never truly comes undone, and if you enjoy raw anticipation, it doesn’t get much better than this. I get the feeling that creating a heavy mood is something David King Jones was thinking about a lot when recording and mastering “The Covid 19 Christmas Song,” and judging from the ambitiousness of the material in its finished state, I’d be surprised to hear anything less than this from his camp in the future.

I only just heard about David King Jones a week ago after getting into his new single through an industry insider, but I’m really glad that I caught up with “The Covid 19 Christmas Song” when I did. His is a vocal style that is both heartwarming and urgent in spirit, and no matter what he records next, my gut tells me it’s going to be melodic, spellbinding and definitely intriguing enough for a critic like myself to give it a spin. This is a good exhibition, and next, I’m ready to hear the full meat and potatoes of his sound.