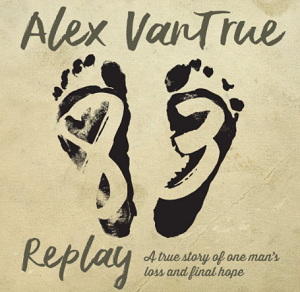 Imagine the heartache of losing a child – now take that pain and suppress it for decades. What would that song be like, would there be any joy? Alex VanTrue, a singer who tackles songwriter James Fairchild’s heavy, sorrowful memory in the moving “Replay” recalls what can’t be forgotten. A premium songwriter, a soothing guitar – “Replay” is a transforming listening experience. To hear the emotion in VanTrue’s voice is to feel the almost tangible love.

The backstory to “Replay” is both tragic and would also make for sensational headlines. Years ago, a 24-year-old single Fairchild engaged in an affair with an older, married woman. At that point you might be thinking the song’s more about the passion and the illicit rendezvous. One unfolds is the loss of a child conceived during that affair, and an accident. That’s the backstory, Fairchild provides on the website and press materials. If you were to only listen to the song, you might not glean those details, but what Fairchild and vocalist VanTrue convey is that losing the baby is a void that has never been filled.

I can’t replay what’s been taken away, and I regret it every single day, VanTrue sings. His voice, clearly meant for the world’s largest stages, sings with crisp, grand sonic delivery. VanTrue taps into something imaginable, indicating to the listener that his talents cover genuine delivery despite the fact he didn’t even write the lyrics himself. I realize, of course, that there are thousands of songs that aren’t song by the songwriter themselves – but this is a different ball game, in my opinion. To reach into his gut, to sing the way he does, my goodness.

Rumbling below this awakening, this life-changing lyrical flower bed, is a music base filled with melodic guitar. What I couldn’t place what I was hearing was the guitar. There were moments when I felt like it was Flamenco guitar- arrangement. A fluttering, erratic explosion. Other times I was convinced it was just an acoustic guitar lost in it a circling, hurricane of riffs. Both ideas are easy to embrace. I think the guitar work, as gripping as it comes across, is also bright and joyful. It’s a process and it flows along underneath Van True’s voice like a weathered heartbeat. To go to through this, to carry this pain for decades, I think the guitar mimics that baggage in its own way.

This is an emotional song, and it definitely had me enamored with the words. It made me appreciate the human connection even more, and it made me feel grateful for the gifts I have in your own life. As far as songs about regret goes, “Replay” is one of the most remarkable story lines I’ve encountered in song since Ben Fold’s Five’s “Brick”. Songs like “Replay” stay with you and weighs on you differently than a traditional pop song. We need songs like this, as much as we don’t want to face these feelings. Loss is a part of life, but “Replay” never loses the listener’s attention.

The music of Alex VanTrue has been heard all over the world in partnership with the radio plugging services offered by Musik and Film Radio Promotions Division.  Learn more https://musikandfilm.com

Share
Previous Greg Hoy – “Can You Take It?” (SINGLE)
Next “The Covid 19 Christmas Song” (SINGLE) by David King Jones