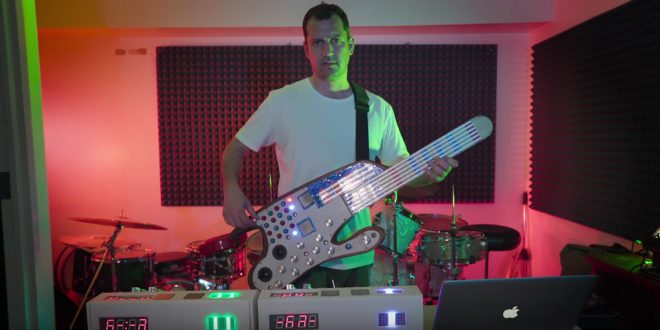 We’ve seen references to you as an LA artist and a NYC artist. Where does Smomid call home?

I was born and raised in the west side of Los Angeles, so that will always be my home. I moved to NY a long time ago and that is where I am based. Basically I am a very urban person. Maybe that’s reflected in my music, I don’t know.

I worked with Jazz artist Chico Hamilton as a guitar player for a while and a lot of the things he did influenced me even though Smomid music is an entirely digital solo project. Mostly things about how to phrase a melody, how to create space for different elements in a musical arrangement that you want to focus on. Is the focus on the bass, melody or drums? Creating drama and anticipation in music. These are some of the things I saw Chico do that I learned from him.

Other than that I have so many thousands of influences it’s hard to name them, from classical to techno to flamenco to jazz to Arabic music to Sufi music to improvised/experimental music. I wouldn’t know where to begin if I made a list of artists.

When did you know you were destined for more than just creating music; but for creating the vessels that make the music?

One day while creating material for the first Smomid album, Rhythms of Light, I had a sort of revelation. That day I had everything set up in my studio, the LEDs in the instruments were blinking, the Artificial Intelligence part of the software was creating melodies and bass lines, and I was sort of just sitting there listening and being amazed at what was happening. I realized that day I had to pursue this modality of creating art for a while. There are so many things I can do with my instruments that I can’t possibly ever play on traditional instruments. There are even ways I make music almost instantaneously that would take forever to realize if I tried to create and record each part individually.

Having said all this, there are certain really simple things that I can’t do on my instruments. Every musical instrument has it’s strengths and weaknesses, you just have to focus on what you can do best.

Cyber Solstice sounds like nothing we’ve ever heard before. How do you classify your music?

I am really bad at classifying music. Music and sound is such an abstract realm and I don’t know  how to distill it down into words. There is no visual or symbolic aspect to sound, it really just exists as waves of air floating through time.

Having said that, I would add that on Cyber Solstice there are some improvised solos, some experimenting with different sounds and some orchestrations of different synth sounds to create more full sounding textures.

What is your favorite reaction you get from fans when they see you perform?

I love when fans see me perform and they want more to know more and are curious about what I am doing. Sometimes these people talk to me or reach out to me, we stay in touch and they come see me play the next time I am in their city.

What instruments do/did you play before you started making your own?

The whole Smomid project developed from playing guitar, which I consider my primary instrument. I wanted a way to interface my guitar with computer software. I was also making my own music software  and doing sound design before I was making instruments, so the Smomid project is a marriage of these pursuits

“Cr8tive De$truction” is our favorite track on the LP. It should be the soundtrack to a haunted Indiana Jones-themed video game. Is there a song on Cyber Solstice that stands out as your personal favorite?

I like Cr8tive De$truction too. I like Adrenachromatica because I feel like it really takes you on a journey. I also like the way Geophilia came out. I played Geophilia for a friend and he had a real emotional response to it, which is kind of what I wanted.

I am making more music and creating some visuals to completely overstimulate an audience in a live setting. I am also working on a new instrument that is a huge improvement for me that I am very excited about.